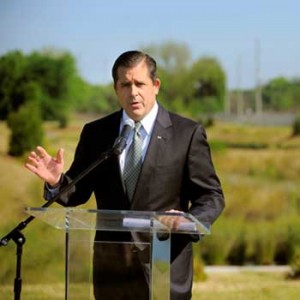 According to a new report released by the Center for American Progress and Oxfam America on the long-term economic benefits of restoring coastal ecosystems, wetland restoration projects like the one in Georgia can have a substantial positive economic impact.

The report shows that each dollar invested by taxpayers in coastal restoration projects returns more than $15 in net economic benefits. The findings — based on three restoration projects in Seaside Bays along Virginia’s Atlantic coast; Mobile Bay, Alabama; and South San Francisco Bay, California — were funded in 2009 by stimulus grants from the National Oceanic and Atmospheric Administration.

Healthy coastal ecosystems provide not just environmental benefits, but critical social benefits as well. They filter pollution, buffer coasts against extreme weather, serve as nurseries that sustain fisheries, and support tourism, recreation, and the culture of coastal communities. However, the U.S. is losing wetlands at a rate of seven football fields an hour due to development, pollution, and sea-level rise.

Previous research established that $1 million invested in coastal restoration creates, on average, 17.1 jobs. For comparison, offshore oil and gas creates approximately 8.9 jobs per million dollars of investment. And in low-income coastal communities, these restoration jobs can be significant pathways out of poverty.

May is National Wetlands Month. Find information about wetlands and events through the U.S. Environmental Protection Agency, U.S. Geological Survey, and many others.