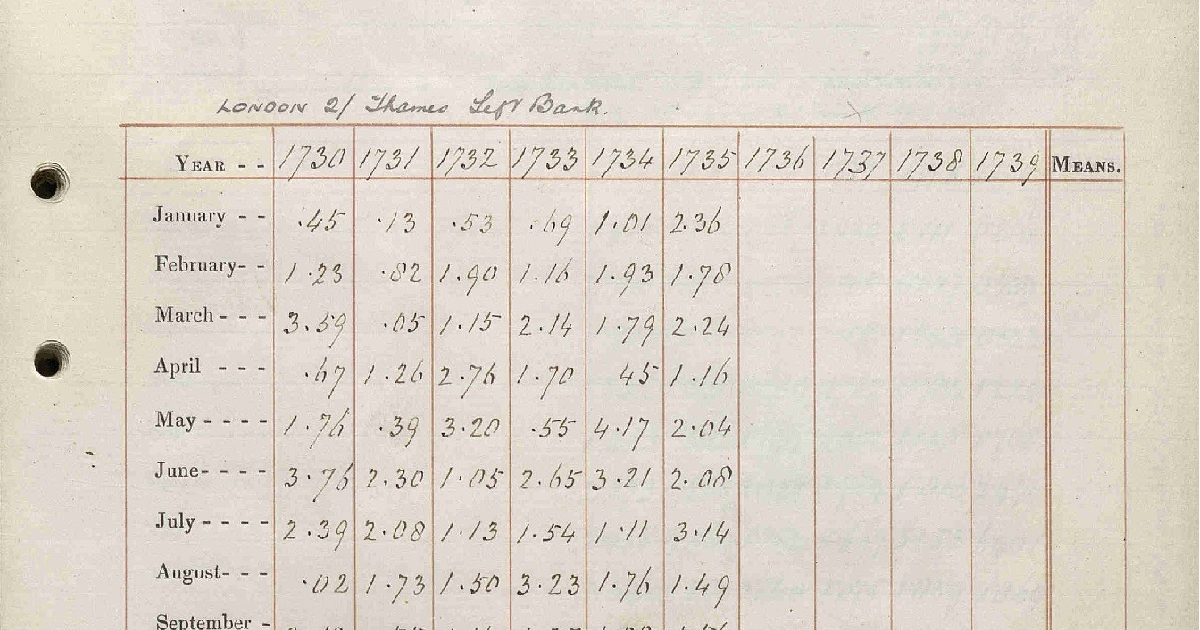 This winter, the United Kingdom weathered its rainiest February in at least 150 years of records kept by the U.K. Meteorological Office (Met Office). According to the Met Office, only four months from 1862 until today had higher monthly rainfall totals than February 2020.

Comparing U.K. precipitation data across centuries was, until recently, a painstaking task for researchers. Although existing meteorological records provide images of U.K. weather on a consistent basis for several centuries, millions of weather measurements taken before the 1950s were accessible only as hard-to-use digital scans or only in physical form, buried within Met Office archives.

Rescuing those measurements – and providing more than 5 million new datapoints to the global research community – was the goal of an innovative citizen science project that occurred from late March through early April. The Rainfall Rescue project, led by University of Reading climate science professor Ed Hawkins, invited the online public to transcribe data from thousands of archived records into a standardized, searchable record of U.K. precipitation that covers hundreds of years.

“With much of the population facing long spells indoors due to the COVID-19 virus, the chance to be part of a serious science project may provide a welcome distraction,” Hawkins said. “We’re set to reach back further than ever in time to rescue millions of pieces of U.K. rainfall data that are currently going to waste in filing cabinets.”

Hawkins had ample experience with climate-related citizen science projects before Rainfall Rescue. During a 2017 initiative led by Hawkins, online volunteers digitized more than 2 million pieces of weather data collected by meteorologists stationed on Ben Nevis, Britain’s highest mountain, from 1883 to 1904. A separate effort, in partnership with the British Science Association, involved digitizing approximately 2.5 million datapoints captured by U.K. meteorologists between 1860 and 1880.

Rainfall Rescue was a larger undertaking. It aimed to digitize twice the amount of data as Hawkins’ previous citizen science projects combined, Hawkins told University of Reading when the project launched on March 26.

Volunteers proved eager to participate. On April 10, Hawkins announced on Twitter that “65,000 ten-year rainfall sheets were digitized by 15,762 volunteers, rescuing over 5 million measurements,” marking the project’s completion. Hawkins and his research team are now undertaking a quality control process, after which they will release the newly digitized data online for free, according to the Rainfall Rescue website.

When stormwater professionals design and maintain new flood-prevention infrastructure, they often look to historic precipitation records for guidance on how an extreme rainfall event might look in their area. The extra detail provided by the records digitized during Rainfall Rescue will help researchers and infrastructure managers “better understand wet, dry, and normal periods in our history and help water companies plan for every eventuality,” according to the Rainfall Rescue website.

While the bulk of the rescued data covers the period from the 1820s to the 1950s, some outliers date back as far as 1677. The range of recovered data, the project team hopes, will better inform long-term rainfall trends and enhance researchers’ ability to measure climate change effects.

“These records will help scientists better understand how and why rainfall varies so much in different locations across the U.K.,” Hawkins said.

Explore centuries-old rainfall measurements in the U.K. at the Rainfall Rescue project website.