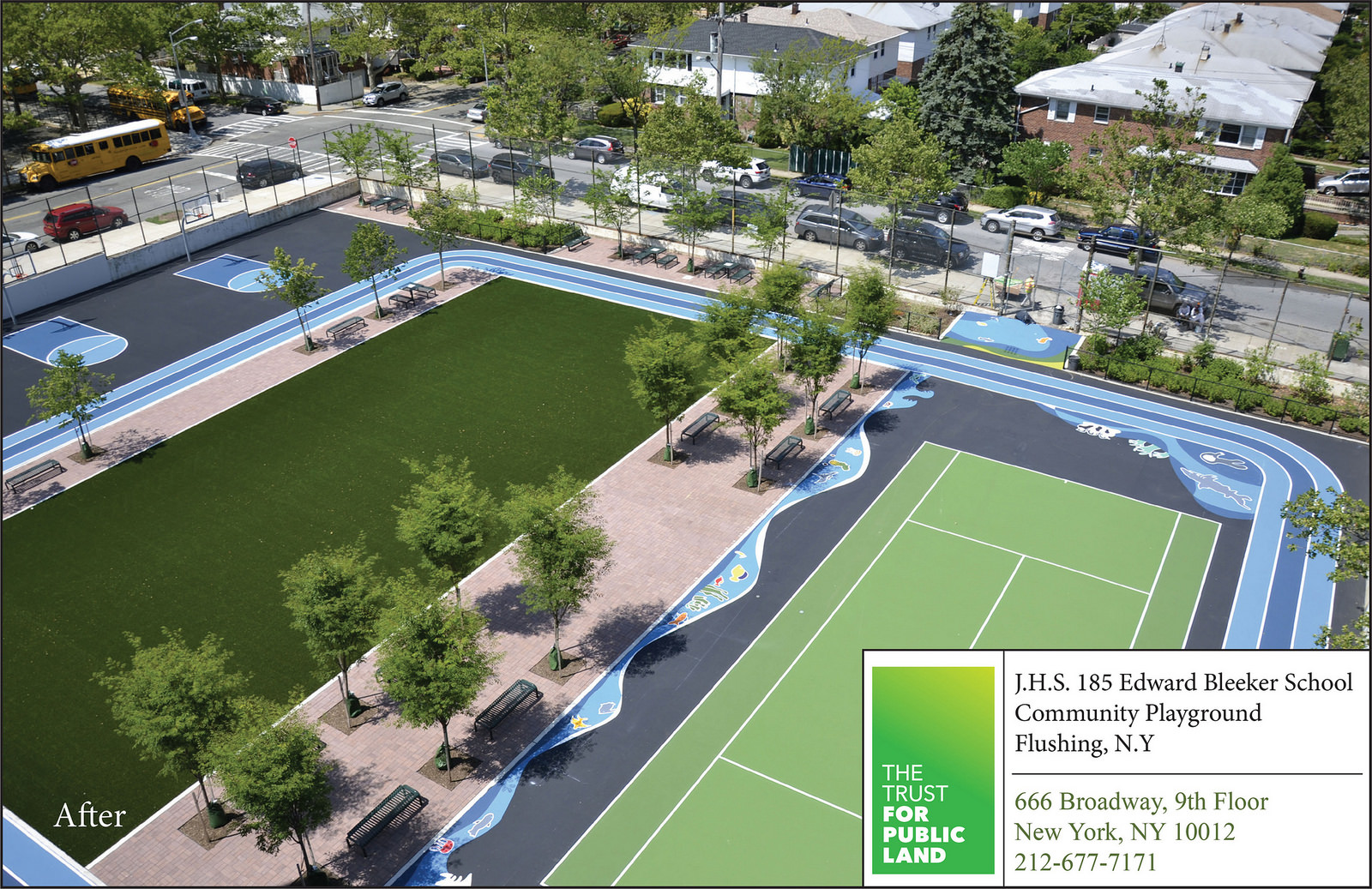 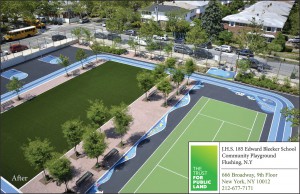 A 0.5-ha (1.2-ac) asphalt lot at the Edward Bleeker Junior High School has been transformed into a playground capable of capturing more than 4164 m3 (1.1 million gal) of stormwater each year. (Credit: Tim Schenck)

A 0.5-ha (1.2-ac) asphalt lot at the school has been renovated with green infrastructure elements capable of capturing more than 4160 m3 (1.1 million gal) of stormwater each year, according to a joint New York City Department of Environmental Protection (DEP) and Trust for Public Land (San Francisco) news release.

The renovated playground features an artificial turf field made of woven polyester filaments. The field sits on top of a stone stormwater storage system equipped with perforated distribution pipes to promote infiltration.

Building a playground for the community 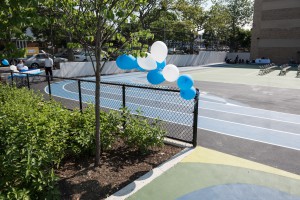 The playground was designed with help from the school’s students, parents, and teachers, as well as the surrounding community.

“[They] took part in a 3-month participatory design process where they created a wish list, voted on priorities, analyzed existing site conditions, and worked with to-scale models to come up with a design that met the unique needs of the school and community,” Lee said.

Community members also will have the chance to enjoy the playground which will operate as public open space during weekends, holidays, and school vacations. In addition to providing new green recreational space, the renovation will help improve the health of the nearby Flushing Creek and Flushing Bay.

The Trust for Public Land chose the space for a new park through a system that uses geographic information system (GIS) data to identify areas in mid- to low-income neighborhoods lacking adequate park space, Lee said. These areas are compared to the DEP’s priority watershed areas for combined sewer overflow (CSO) abatement. The Flushing Bay watershed has been designated as a priority area by the DEP, Lee said. 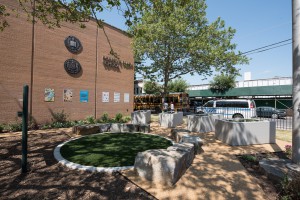 The playground renovation was funded through a public-private partnership, with funds raised by The Trust for Public Land from Charina Endowment Fund, as well as the New York City Departments of Education and Environmental Protection and School Construction Authority. The total cost of the playground is nearly $1.1 million, including $765,000 for construction and $333,000 for design, community engagement and environmental education, the news release says.

Since 2013, the Trust for Public Land has partnered with DEP to open nine green infrastructure playgrounds that feature permeable pavers, trees, gardens, and stormwater-capturing turf fields. In addition to the Edward Bleeker school playground, this summer the organizations also opened another playground at the Robert E. Peary School in the Ridgewood neighborhood of Queens that will capture about 1419 m3 (375,000 gal) of stormwater each year, said Joan Keener, Trust for Public Land New York City Playgrounds program manager. 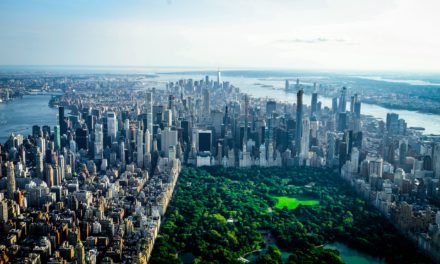