Bringing life back to dead zones 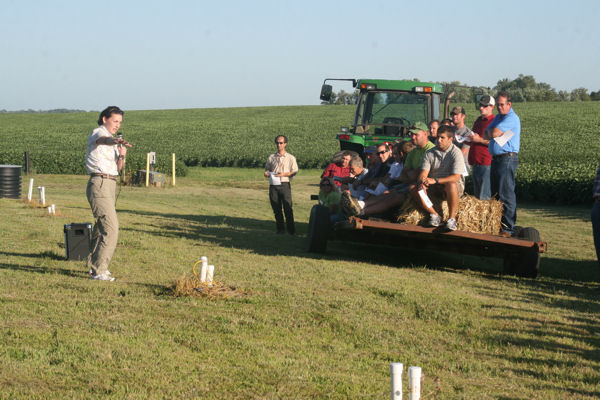 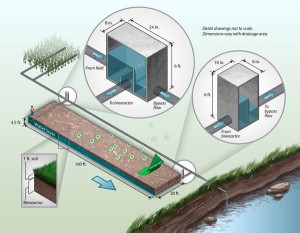 Dead zones — those regions that can be found in the Great Lakes, Chesapeake Bay, and even the Gulf of Mexico — are a serious problem for U.S. waterways. These hypoxic zones, the result of excess nitrogen and phosphorus run off, can lead to algae blooms that can stifle aquatic life. Regulators are doing their part to reduce these dead zones by mandating the decrease of nutrient runoff from water resource recovery facilities and farmlands

and stormwater runoff in cities. Scientists also are trying to help by developing new ways that can treat this runoff at its source so that it has less of an effect on waterways.

Since 2008, Laura E. Christianson, assistant professor of Water Quality at the University of Illinois (Urbana), has found a way to reduce the amount of nitrogen runoff from farms using bioreactors or woodchip-filled trenches. 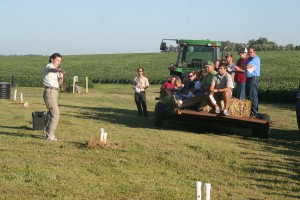 Laura Christianson, assistant professor of Water Quality at the University of Illinois (Urbana), stands on top of an “out of sight, out of mind” denitrifying bioreactor while describing how it works during a field day tour. The bioreactor monitoring wells used for research are visible. (Credit: J. Comito/Iowa Learning Farms)

Christianson explained that the idea of using bioreactors to filter runoff has been around for about 25 years. The concept started “with researchers in Canada and New Zealand,” she said. “Pressing water quality concerns in the U.S. Midwest have driven exponential growth in interest in this topic over the past 10 years. Agricultural tile drainage in the U.S. Midwest that often contains nitrate eventually ends up in the Gulf of Mexico via the Mississippi River where it is a key contributor to the seasonal Gulf of Mexico hypoxic zone.”

When Christianson started her doctorate in 2008 at Iowa State University (Ames), she “was intrigued by the idea of using engineering to enhance a natural process that could clean water simply and cheaply in agricultural settings.” She added, “We’ve learned a lot since then, but there are still some important design questions to make bioreactors remove even more nitrate from tile drainage and to get more farmers interested in this practice.”

Most of Christianson experiments are in Maryland where “we’ve been looking at modifying woodchip bioreactor technology to fit better with the drainage ditches and shallow groundwater out there,” she said.

Although sizes of these trenches can vary, usually they are about 30.5-m (100-ft) long and 6.1-m (20-ft) wide, and covered by 0.3 m (1 ft) of top soil, according to an American Society of Agronomy news release. The trench is generally 1.1 m (3.5 ft) deep and filled with woodchips — the carbon-rich food sources for bacteria within the trenches. Tile pipes from the fields are rerouted through the trench before flowing into the stream, according to the release.

Christianson and her team are starting to set up similar trenches in Illinois “to develop better hydraulic designs for these simple woodchip-filled trenches to make sure we don’t have stagnant zones where water just sits inside the bioreactor.”

So far results show that the bioreactors can reduce nitrate load from a tile-drained field by approximately 40%, Christianson said. “This can vary a lot from site to site and year to year, however. A good general range is about 15% to 60% annual nitrate load reduction,” she said.