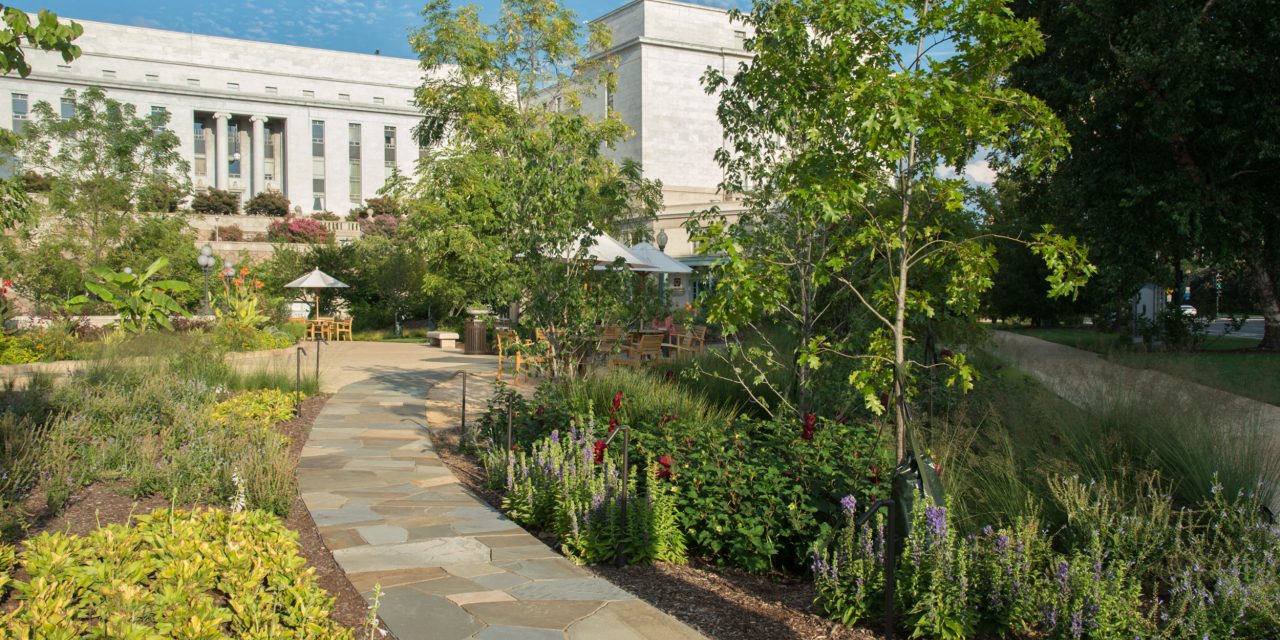 Among urban planners, the conversation about the potential of green infrastructure is changing.

Mounting evidence that green infrastructure can be used to not only manage stormwater, but improve the health, value, and attractiveness of its surroundings, is convincing more and more U.S. cities to recommend green infrastructure as a preferred alternative to conventional pumps and pipes. The next question that must be answered, argues a recent study that appeared in the journal Landscape and Urban Planning, is how cities can best position green infrastructure as a force for environmental equity. In other words, how can cities maximize the potential for green infrastructure to address longstanding disparities among different neighborhoods related to such quality-of-life factors as exposure to environmental risks and access to green spaces?

Researchers behind the new study, who analyzed plans and guidelines for green infrastructure implementation issued by the governments of 20 U.S. cities, contend that the municipalities that develop zoning and building codes and control city budgets have the most power to ensure green infrastructure can promote environmental equity. However, while their analysis shows that most U.S. cities understand and acknowledge that potential, none have yet developed plans that fully realize it.

“Many U.S. cities use green infrastructure to comply with stormwater regulations in the Clean Water Act,” said lead author Zbigniew Grabowski, who worked on the study as a postdoctoral researcher at the Cary Institute of Ecosystem Studies (Millbrook, New York) and now performs water quality research for the University of Connecticut (Storrs). “Significant investments are being made — often without scrutinizing how the benefits and burdens are distributed. Who gets jobs? Who is displaced? Whose voices are heard in the planning process? These are among the questions we need to address.”

The research team members began their exploration of the degree to which cities regard the scope and intentions of green infrastructure by focusing on how they define it. One city, for example, might consider green infrastructure primarily as a means to address flooding — largely ignoring its co-benefits — whereas another might see its ability to manage stormwater as secondary to its socioeconomic uses.

After gathering more than 360 documents with potential implications for municipal green infrastructure policy concerning cities of varying sizes and climates, the team decided to focus only on official planning documents authored by municipal agencies rather than community or nonprofit groups, narrowing the field to 122 plans from 20 cities that specifically defined the term “green infrastructure.”

According to the study, about 45% of these plans use the word “equity” as part of their definition of green infrastructure — however, only 13% of the plans elaborated on the term’s meaning or offer specific guidance on how green infrastructure can help achieve it. Only 10% of plans contain language requiring opportunities for participation in green infrastructure planning decisions by the residents who will benefit from them.

While the analysis shows that many plans fall short with regard to environmental equity, several cities stand out as more equity-minded than others in the ways they frame green infrastructure, Grabowski said. Among those with the most comprehensive plans include Atlanta; Austin; Baltimore; Milwaukee; and Portland, Oregon.

In the past, the exercise of eminent domain — the right of cities to seize private property after compensating the owner — was a more common way to facilitate the establishment of large-scale green spaces. Today, displacement tends to occur more gradually, Grabowski said. In some cases, cities install highly visible green infrastructure measures such as large parks or expansive streetscape improvements with the explicit goal of increasing local property values. Property taxes, as well as rents and costs of ownership, also tend to rise in these cases, potentially forcing lower-income residents to relocate.

“This economic pressure cannot be separated from the legacies and ongoing realities of discriminatory lending, policing, and structural disadvantage that make some communities more vulnerable to economic and environmental pressures than others,” Grabowski said. “While no city examined had a robust anti-displacement plan in place, several refer to the need to create one, namely Atlanta and Portland.”

Extending a Hand Without Extending the Timeline

One key takeaway from the research team’s analysis is that one of the best ways to foster equity is to perform extensive community outreach at every stage of a prospective green infrastructure project. This means more than simply holding public meetings to educate locals about a plan already in progress — the researchers challenge urban planners to involve neighbors early in the design process, valuing their feedback just as highly as input from technical experts and city agencies. The community also should be part of the conversation regarding where a project will be built, who will construct it, and who will maintain it during its lifespan.

The researchers acknowledge, however, that outreach on this scale both extends the project’s timeline and enlarges its price tag. Particularly in smaller cities with tighter budgets, urban planners may struggle to strike a balance between effectively involving locals and minimizing project-delivery costs.

“We would argue that making investments in community capacity to be engaged in greening keeps city money circulating within the local economy,” Grabowski said. “For example, a city that has limited resources could be tempted to employ external consultants to create a greening plan, who would then see community engagement as an extension of a project timeline. Money spent on the consultant is gone from the city, and a plan that has had no community input and may not be aware of relevant, on-the-ground issues, is delivered. Now it needs to be implemented, and as it gets implemented, it leads to protest and public outcry.”

This resistance may add more to the project’s bottom line than the extra outreach might have cost, he describes. It is not unusual for protests to necessitate additional, ad hoc planning meetings or even interfere with construction. On the other hand, extensive outreach may pay greater dividends over the long term, Grabowski said.

Distribution mostly concerns the placement of new green infrastructure — i.e., whether the installation will offset environmental hazards, whether it will increase local property values without displacing vulnerable populations, and whether the plan contains long-term provisions to ensure the installation continually operates as intended. A high-scoring plan will not only contain thoughtful and comprehensive attention to siting but also feature avenues to increase the wealth of locals, such as providing new, well-paying jobs in infrastructure operation and maintenance.

Top image courtesy of Architect of the U.S. Capitol