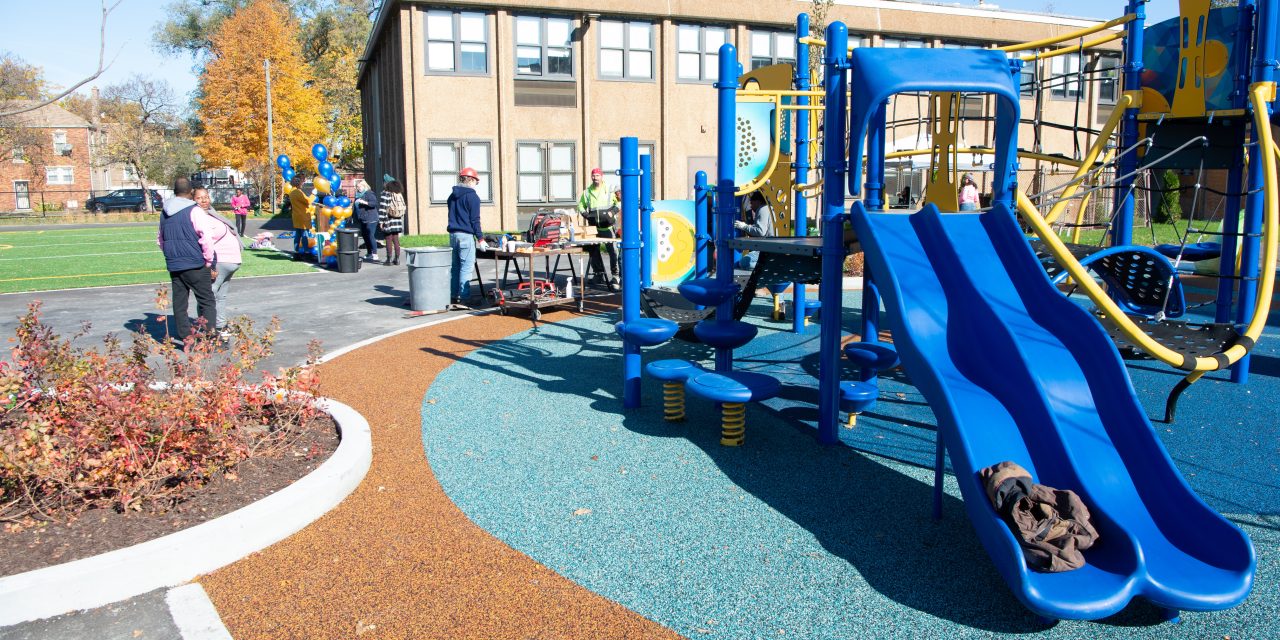 Chicago’s Space to Grow program — a partnership between water agencies, environmental advocates, and educators that redesigns public schoolyards with an emphasis on green infrastructure — recently completed projects at four schools. As a result, the Edward Coles Language Academy in Chicago now boasts a runoff retention capacity of nearly 2.1 million L (570,000 gal): the largest among the 34 schoolyards redesigned by Space to Grow partners since 2014.

The renovation at Coles, completed Oct. 28, 2022, resulted from a year-long design and construction process informed by extensive outreach to students, teachers, parents, and neighbors.

The Space to Grow program is orchestrated by Chicago-based nonprofits Openlands and the Healthy Schools Campaign as well as the Chicago Department of Water Management, Chicago Public Schools, and the Metropolitan Water Reclamation District of Greater Chicago (MWRD). The outreach process aims to produce a schoolyard design that directly responds to the stated needs of community members while also enhancing the neighborhood’s resilience against flooding and combined sewer overflows, described MWRD President Kari K. Steele.

“The new schoolyard at Coles School offers students a dynamic place to play, learn, and grow, while allowing the neighboring community to benefit from the green infrastructure elements that mitigate flooding and improve water quality,” Steele said in a release. “We hope students and families enjoy all the features that have been included in this beautiful schoolyard.”

A New Classroom at Coles

Unlike many parts of Chicago, sand constitutes a major proportion of the soil beneath Coles. Project planners sought to unlock the potential of these sandy soils. Sandy conditions slow the flow of runoff and maximize retention rates compared to other soil types. But before the project, an impervious asphalt playlot blocked the soil.

The redesign project replaced the playground’s asphalt with a permeable alternative, adjacent to an artificial-turf field that provides a setting for sports while allowing runoff to infiltrate into the soil below. Throughout the property, Space to Grow partners installed a collection of sloped rain gardens seeded with native plants that not only retain precipitation, but also provide new green spaces for students and new habitat for pollinators. A series of kid-friendly signs at each of the new installations teach students the basics behind what they do and why they are necessary.

The benefits of these new green infrastructure elements will extend far beyond the bounds of the Coles campus. The installation will discourage local flooding which has long caused basement backups and combined sewer overflows in the densely populated neighborhood during heavy storms, describes an MWRD fact sheet about the redesign.

From its unique method of identifying schoolyards to redesign to its way of engaging all parts of the school community during the design and construction process, the Space to Grow partnership focuses on environmental equity.

From the 649 campuses managed by Chicago Public Schools, program partners identify candidates for schoolyard redesigns based on their degree of access to safe and functional outdoor spaces as well as other socioeconomic factors, such as childhood obesity rates and average household income. They consider this information alongside hydrological factors, such as the neighborhood’s vulnerability to flooding and the site’s geographic potential to affect it. Schools that score highly in these need-based categories and have a buildable area of at least 2,800 m2 (30,000 ft2) are invited each year to apply for $1.5 million each in Space to Grow funding.

Once schools are selected, partners lead a consultation process that involves surveys and site visits with students, school staff, parents, and community members to identify specific priorities. These could include, for example, specific amenities like new fields or playgrounds, or specific elements that designers should keep intact, such as landmarks or artwork with sentimental value to the community. All major elements of the design undergo a community vote to ensure they address both environmental and social needs.

With the completion of this year’s four Space to Grow redesigns, the partnership describes that its schoolyards now boast a collective rainfall storage volume of 24.6 million L (6.5 million gal) per precipitation event. This capacity is roughly equal to 10 Olympic-sized swimming pools. In the process, these redesigns have engaged more than 900 educators and at least 11,000 students, as well as thousands of parents, neighbors, and school staff.

Learn more about the Space to Grow program at its website.