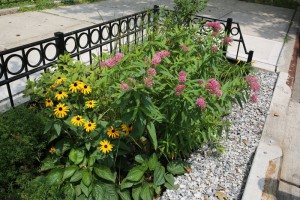 On March 20, the New York City Department of Environmental Protection (DEP) released a detailed analysis of the performance of three neighborhood-scale green infrastructure projects in New York City. The analysis shows that green infrastructure can play an important role in improving the health and cleanliness of local waterways, and that cost-effective practices performed even better than expected, reducing flow to sewers by more than 20%. DEP’s report will guide expansion of New York City’s Green Infrastructure Plan and inform other programs across the country.

Located in the neighborhoods of Bushwick, East New York, and Edenwald, three green infrastructure demonstration areas were chosen because the sewers drains to a single pipe where flow meters were installed to measure the amount of stormwater both before and after construction of the green practices. Within these defined areas, DEP built 70 curbside gardens, or bioswales, that are specially designed to collect and absorb stormwater from the street and sidewalk and keep it out of the combined sewer system.

Across the three demonstration areas, green infrastructure practices managed the first inch of stormwater that fell on over 14% of the impervious area, which surpassed the goal of capturing the first inch that fell on 10% of the impervious area. The report also states that the inclusion of a stone gabion, which hydraulically connects the surface of the bioswale to the storage layer beneath the soil, helps to speed the absorption of stormwater. The use of a stone gabion has now been added to the standard design for all bioswales in New York City.