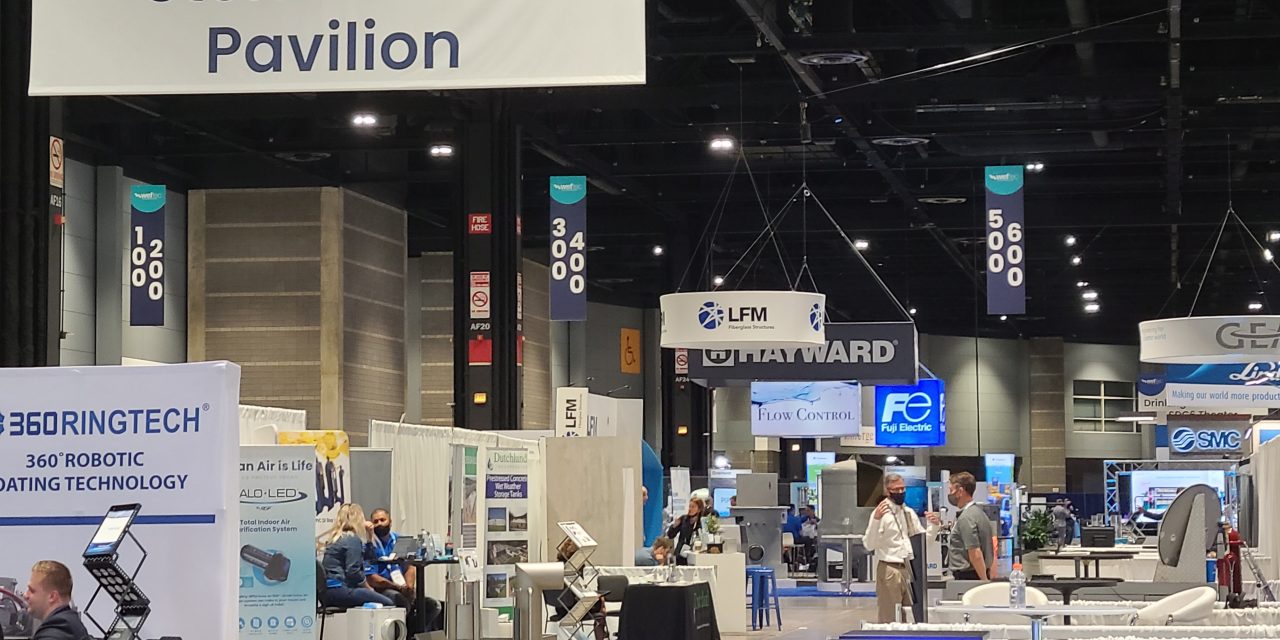 During recent years, the latest trends and technologies in stormwater management have become a hallmark of the WEFTEC exhibition and technical program. WEFTEC 2021 in Chicago was no different, featuring a diverse collection of seminars, products, and perspectives carefully tailored to the needs of stormwater professionals.

Two destinations within the exhibition — the Stormwater Pavilion and the Sustainable Development Goal 6 Theater in the Drinking Water Pavilion — provided a first look at new technologies with the potential to revolutionize asset management, watershed oversight, and wet weather control. The conference technical program also offered countless additional opportunities to learn more about stormwater sector innovations. These presentations examined modernization and futurization among stormwater organizations, hosted conversations about using cutting-edge tools in creative ways to meet water quality and flood control objectives, and offered up new developments on the horizon that are set to transform the way stormwater practitioners operate.

Throughout the stormwater-focused programming, one message remained consistent: While new technology may drastically change the landscape of the stormwater management profession, the mission to protect public health and the environment never wavers.

“It’s easy to get wrapped up in our esoteric stormwater world and think that new technology is our end goal,” described Marcus Quigley, CEO of engineering consultancy EcoLucid (Boston), in a session titled, A Vision for the Future of Stormwater. “In fact, connecting with people is our end goal, and new technology ought to help us achieve that.”

In a session titled, The Digital Transformation Journey, presenters provided examples of how stormwater organizations of all sizes, scopes, and priorities are embracing advanced software and sensors to achieve significant cost savings and minimize burdens on their staff.

For example, the Metropolitan Sewer District of Greater Cincinnati (Ohio; MSDGC) collaborated with EmNet Inc. (South Bend, Indiana) and other partners to introduce a new network of smart sewers in 2015 as part of a multibillion-dollar effort to eliminate combined sewer overflows (CSOs) during intense storms. The effort, which involved augmenting existing collection systems with reactive sensors, has yielded a system capable of automatically moderating flows throughout the MSDGC service area by diverting rainwater based on pipe-segment capacity. EmNet Global Program Strategist Dax Blake discussed how the smart-sewer network of 600 sensors has halved ongoing collection system maintenance costs since its implementation. The network also has reduced CSOs by about 935 million L (247 million gal) per year.

Blake described the Cincinnati project as an example of “late-stage” digitalization, made possible by a series of incremental steps and significant investment.

As Quigley described during A Vision for the Future of Stormwater, “technology is moving more quickly than we can use it on a daily basis.” Quigley and other presenters engaged with participants to discuss their predictions for how technology will change the stormwater management sector and what obstacles the sector must surmount to adapt to these changes successfully.

Quigley’s remarks underscored how the pace at which sensor, satellite, and modeling software technology is developing likely will facilitate watershed data collection and infrastructure decision support. For example, while current satellite-imaging capabilities may not be sufficient to detect minor defects in stormwater infrastructure, advances in satellite technology will greatly aid asset management activities.

“We will see, in the next five years, the capability to map every point on Earth to a 5-centimeter resolution,” Quigley said. “We need to harness that to help maintain stormwater infrastructure.”

Quigley also predicted that the cost of sensors for water quality and quantity will drop dramatically, making it more attainable for even small stormwater agencies to deploy vast sensor networks throughout their service areas.

Andy Erickson, a University of Minnesota (Minneapolis) Research Associate specializing in stormwater, added that the spread of existing technologies will change the way stormwater professionals operate and maintain infrastructure. He mentioned the possibility of using drones to perform remote inspections as well as new forms of self-powered infrastructure that leverage sustainable energy sources and sophisticated sensors to automate operations. Erickson also described the potential for augmented and virtual reality applications to help plan and build support for infrastructure proposals, adding that several stormwater entities in the U.S. are already capitalizing on these programs.

Water Environment Federation (WEF; Alexandria, Virginia) Legislative Director Steve Dye delivered an update on a major infrastructure package pending in U.S. Congress that would provide funding for an extensive set of stormwater programs and projects. Dye described the bipartisan package, which could allocate as much as $2.78 billion in overall stormwater funding over the next 5 years, as “likely to pass within the next few months.”

During a presentation at the Sustainable Development Goal 6 Theater, Dye explained that the timeline for the bill’s passage is tied to the $3.5-trillion budget bill. He added that legislators from both parties are in the process of reconciling differences between the two measures. While Dye cautioned that the precise provisions may change somewhat, he stressed that this major legislation will support stormwater infrastructure and research.

Check It Out! Culverts Could Improve Road Safety for Animals