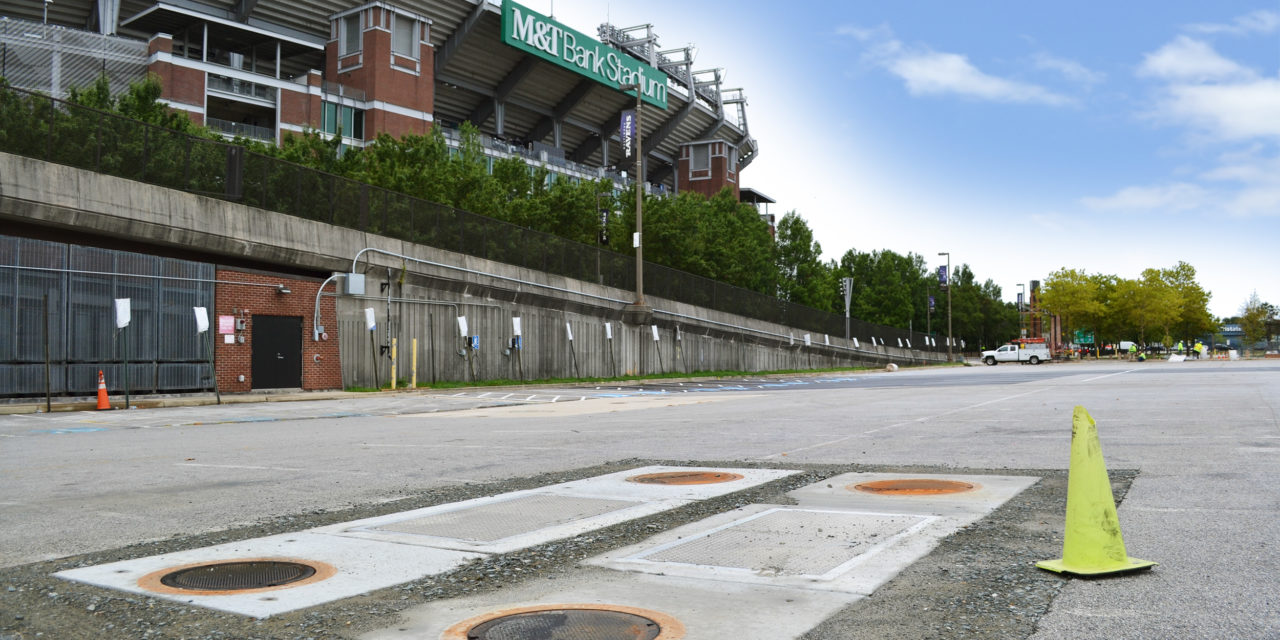 On a typical gameday, thousands of fans flock to Baltimore’s Camden Yards Sports Complex to mingle before attending baseball games at Oriole Park or football games at M&T Bank Stadium. Adjoining the two venues is a 300-meter (975-foot) walkway known as the Pedestrian Spine, a pre-game tailgating destination bordered on both sides by massive parking lots.

In late 2019, the Maryland Stadium Authority (MSA) and its contractors completed a $5-million renovation of the Pedestrian Spine focused on enhancing stormwater management without compromising the tailgater experience. The project joins a growing collection of stormwater-centered investments by managers of high-profile professional sports venues in the U.S., including at the home stadiums of the NFL’s Atlanta Falcons and San Francisco 49ers as well as the MLB’s Minnesota Twins.

The Pedestrian Spine at Camden Yards presented many of the typical challenges developers face when addressing stormwater management in large parking lots, according to a March 2020 fact sheet about the project.

For example, new stormwater elements had to provide enough capacity to manage runoff from two vast expanses of impervious space, but they also had to occupy the smallest possible footprint to maximize space for guests. Additionally, because hundreds of guests park their vehicles in the lots adjoining the Pedestrian Spine during each home game, the retrofits also required sufficient treatment provisions to keep motor oil, heavy metals, and other parking-lot contaminants from entering local waterways.

First, MSA re-landscaped the Pedestrian Spine, adding a series of trees and small gardens around the walkway that provide a natural buffer against flow from the parking lots.

However, the powerhouse driving the redesign project’s stormwater management capabilities was a unique, underground biofiltration system designed by Bio Clean Environmental Services (Carlsbad, California). The system accepts runoff from large, strategically placed drains, which then flows horizontally through a specialized filtration media that mimics a natural wetland’s absorption power. Treated stormwater that flows at a controlled rate into the surrounding area meets pollutant-removal benchmarks without requiring any input from surface-level plants. Installing five of these units around the Pedestrian Spine provided comprehensive stormwater management with minimal above-ground infrastructure and virtually no interruption to the gameday experience, described Bio Clean Regional Stormwater Manager Brad Eldred in a profile about the redesign.

“This design allowed the stormwater to be adequately managed without sacrificing any space along the new walkway, or any parking spaces within the existing parking lot,” Eldred said.

The redesigned Pedestrian Spine complements an array of existing water-conscious features at Oriole Park and M&T Bank Stadium, both of which have achieved Leadership in Energy and Environmental Design (LEED) Gold designations from the U.S. Green Building Council (USGBC). For example, both venues feature waterless urinals and water-efficient restroom fixtures, and a dynamic irrigation regimen at M&T Bank Stadium drastically reduces the facility’s external water needs, according to the MSA website.

When the Atlanta Falcons NFL team opened Mercedez-Benz Stadium in 2017, for example, it became the first-ever U.S. professional sports venue to achieve LEED Platinum status from the USGBC. The stadium, which sits at the top of the flood-prone Proctor Creek Watershed, features numerous bioswales throughout the property as well as a 2.5-million-liter (680,000-gallon) stormwater cistern. Captured runoff finds on-site reuse applications for landscape irrigation and in the large cooling tower that serves the venue. In total, the stadium can store more than 7.5 million liters (2 million gallons) of stormwater, AccuWeather.com reported.

Levi’s Stadium, home of the San Francisco 49ers NFL team, features a 2,500-square-meter (27,000-square-foot) green roof as well as an expansive underground biofiltration system. The biofiltration system, designed to manage runoff from a 10-year storm, features a unique filtration media that breaks down runoff contaminants and repurposes them as nutrients for on-site vegetation. Additionally, the venue engages visitors in their sustainability efforts directly with monitors throughout the property that offer real-time statistics on the facility’s effects on air, water, and energy.

In 2019, the Minnesota Twins MLB team debuted one of the largest living walls in the U.S. in a highly visible location opposite home plate. The wall, which features nearly 6,000 hanging plants, is nourished by stormwater that falls over the field and lower levels of seating. Target Field managers also repurpose captured stormwater to irrigate the field and wash out stands and bleachers after it undergoes a sophisticated, onsite disinfection process.