According to a new report released Sept. 3 from the U.S. Environmental Protection Agency (EPA) Office of the Inspector General, the EPA and states in the Mississippi-Atchafalaya River Basin (MARB) need to better monitor and track progress in reducing nutrient discharges to the Gulf of Mexico. According to the report, a uniform and comprehensive measurement and accountability system is needed at both the state and watershed levels.

Little progress has been made toward a 2001 goal to reduce the 15,000 km2 (5791 mi2) dead zone in the Gulf of Mexico to 5,000 km2 (1930 mi2), as established by the Mississippi River/Gulf of Mexico Watershed Nutrient Task Force. The MARB encompasses nutrient flow from 31 states and two Canadian provinces — complicating efforts due to the sheer size of the basin. Nutrient flow includes an estimated 11.6 million metric tons of nitrogen. Most nutrients, 70%, are attributed to agricultural activities in the basin. Further complications arise from the fact that these activities are considered nonpoint sources and not regulated under the Clean Water Act. The U.S. goal of producing 57,000 to 136,000 ML (15 billion to 36 billion gal) of renewable fuels by 2022 also has led to increases in fertilizer use and nutrient runoff within the basin.

According to InsideEPA, the inspector general also will review the effectiveness and efficiency of municipal stormwater programs, particularly on implementation and compliance progress and water quality outcomes. The inspector general will examine how select municipalities are implementing consent decrees, including how they are achieving milestones and anticipated results.

Check it Out! Stormwater Pump Station Disguised as House 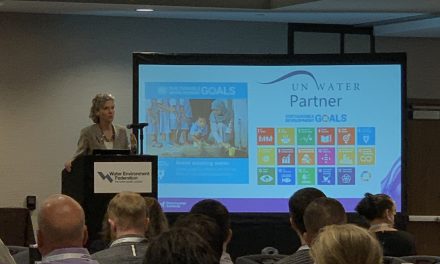 Broaddus: The Bigger ‘Why’ of Stormwater Management