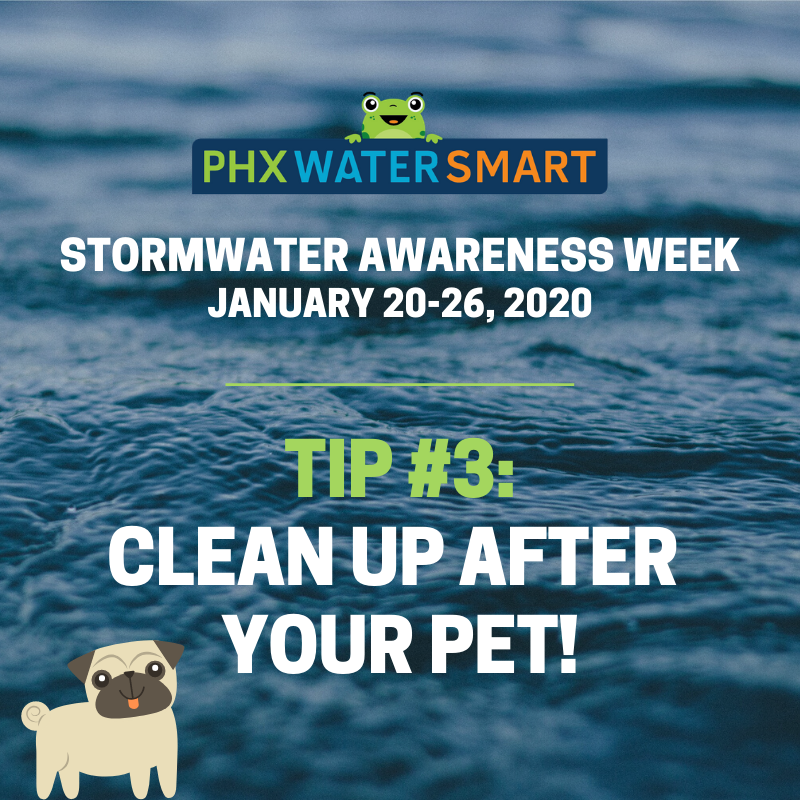 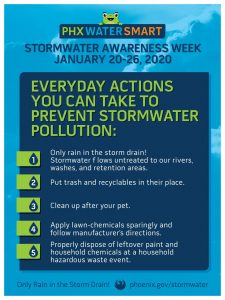 During the last week of January, the importance of individual contributions to stormwater management took center stage in Phoenix, Ariz., as messages urging locals to avoid littering, to properly dispose of hazardous chemicals, and to clean up after their pets were posted throughout the city.

The messaging was part of the City of Phoenix Water Services Department’s (WSD) inaugural Stormwater Awareness Week, a campaign aimed at raising the profile of local issues related to flood prevention and runoff pollution mitigation.

“As the fifth largest city in the nation, we have the ability to reach a lot of people with this important campaign,” said Phoenix Mayor Kate Gallego in a January WSD news release. “We hope Stormwater Awareness Week will not only educate, but also motivate folks to make smart choices when it comes to preserving the quality of stormwater in our desert city.”

In 2009, the U.S. Environmental Protection Agency launched its first annual Fix a Leak Week campaign in Phoenix. The national awareness program calls on homeowners around the U.S. to make a pledge to fix leaks in their households, promoting water conservation and cooperation between water utilities and their customers.

“For our first Stormwater Awareness Week, we focused on getting information out through social media, radio ads, and billboards,” Palumbo said. “We also put posters in all City of Phoenix libraries, City Hall, and many WSD facilities.”

Messaging around the city called on residents to:

“Everyone has a role in stormwater pollution prevention, and by taking these simple actions our efforts can go a long way in keeping our rivers clean and beautiful for generations to come,” Phoenix City Councilwoman Thelda Williams said in a news release.

While Stormwater Awareness Week may have been the brainchild of WSD’s public information and community outreach staff, the campaign was not restricted to Phoenix’s city limits. WSD is a member of STormwater Outreach for Regional Municipalities (STORM), a coalition of central Arizona water agencies focused on communicating the importance of stormwater management. Several STORM members pushed Stormwater Awareness Week messaging through their channels, Palumbo said, including Maricopa County, the City of Goodyear, and the Town of Queen Creek, and the Arizona Department of Transportation. 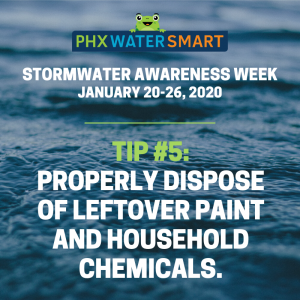 Public outreach and education are fundamental roles of stormwater professionals. Community participation is key for innovation to thrive in the stormwater sector and amplifying simple messages about what citizens can do at home to prevent flooding and protect water quality is a relatively easy way to build community support.

“Start planning as early as possible,” Palumbo said, when asked about her advice for outreach-minded stormwater agencies eyeing their own Stormwater Awareness Week events. “Involve as many different people as you can. And have fun!”

Check It Out! Talking About Stormwater