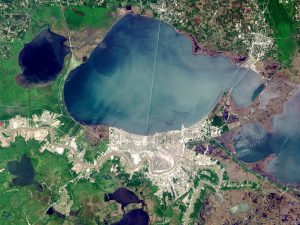 New Orleans’ Gentilly neighborhood, bordered to the north by Lake Pontchartrain, is the target of an ongoing flood-resilience investment program valued at $141.3 million. The neighborhood, a low-lying, flood-prone area that sits on the former site of a marshland habitat, is intended to serve as a model to demonstrate innovative flood-control measures that could scale up to the rest of the city. U.S. National Aeronautics and Space Administration.

Located along the shore of Lake Pontchartrain, New Orleans’ low-lying Gentilly neighborhood has been a hotbed of flood-control innovation in recent years. As the city’s first “resilience district,” municipal government organizations are collaborating to invest more than $140 million into Gentilly to demonstrate groundbreaking pilot projects that address the area’s chronically stressed drainage systems and sinking soils.

One such pilot project, which began accepting applications this summer, will offer low- to middle-income Gentilly homeowners grants up to $25,000 each to install green stormwater infrastructure on their property.

Through CAP, Gentilly homeowners who possess flood insurance and annually make up to 80% of the neighborhood’s median income can access subsidies that enable them to participate personally in the Gentilly Resilience District initiative.

“This is going to address stormwater on-site, on private property, on residential areas,” Cantrell said at the press conference. “It will alleviate flooding and you will be able to see the impact immediately from one rain event to the next.” 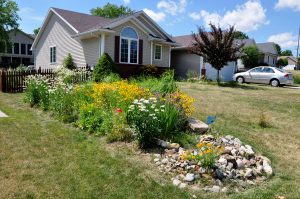 A first-of-its-kind initiative called the Community Adaptation Program will enable qualifying low- to middle-income Gentilly homeowners grants to construct green infrastructure measures such as rain gardens on their properties through subsidies up to $25,000. Jason Johnson/U.S. Department of Agriculture.

The NORA-managed program, which expects to award about $5 million in total to qualifying Gentilly homeowners, will result in a network of small-scale green infrastructure interventions, such as rain gardens, stormwater planter boxes, newly planted trees, and detention basins.

According to a NORA fact sheet, between 2600 and 3900 Gentilly households currently qualify for CAP.

“This is a very welcome initiative,” said New Orleans Council Member-At-Large Helena Moreno during the July press conference. “I believe that with this administration, along with this council, this is just the beginning of much more to come for improved stormwater management. This particular project also demonstrates that every single resident should be playing a role.”

A neighborhood-scale model for resilience

While CAP aims to incorporate private property into the Gentilly Resilience District’s goals of adapting to the threats of intensifying rainfall, other projects planned or implemented under the effort will adapt public areas to capture rain, reduce land subsidence, and support drainage.

Other projects announced by the city include

Projects under the Gentilly Resilience District initiative are being funded by the U.S. Department of Housing and Urban Development, who in 2016 awarded $141.3 million to New Orleans to support the Gentilly project through 2022.