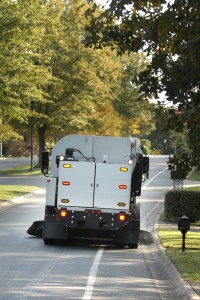 Seattle Public Utilities plans to use street sweeping to remove at least 127 Mg (140 tons) of pollutants per year — about 410 dump-truck loads — from city streets before they wash into waterways.

In 2013, the City of Seattle agreed to reduce sewer overflows to comply with state and federal law. Seattle City Council Resolution 31459 created a city policy to adopt green infrastructure, such as bioretention swales, street trees, rain gardens, cisterns, green roofs, and permeable pavement, to manage stormwater. The resolution set a target for the city to manage 2.7 million m3 (700 million gal) of runoff annually with green stormwater infrastructure by 2025. Now the city has released a plan to start working toward this goal.

In July, Seattle Mayor Ed Murray released a draft of the Green Stormwater Infrastructure Strategy, which outlines plans to accelerate green approaches for preventing stormwater pollution. The draft strategy sets an interim goal of managing 1.5 million m3 (400 million gal) of runoff annually with green stormwater infrastructure by 2020. It also summarizes the progress that has been made, outlines strategies for accelerating adoption of stormwater infrastructure in Seattle, and presents a 2-year work plan, a news release says.

This strategy helps to fulfill the part of the new 2015 National Pollutant Discharge Elimination System (NPDES) permit from the Washington State Department of Ecology that requires the entire state use low impact development as part of its stormwater infrastructure. The state issued a Municipal Stormwater Permit that requires Seattle to review, revise, and update its development-related codes and standards to make low impact development a default approach to site planning and land development, according to the draft Green Stormwater Infrastructure Strategy.

“While natural drainage approaches have been central to our work for nearly 15 years, this strategy guides us in redoubling our efforts to accelerate adoption,” said Ray Hoffman, director of Seattle Public Utilities. “For us, this means building innovative partnerships with sister agencies, community organizations, and project developers, and supporting Seattle residents’ efforts to manage their stormwater onsite.”

Seattle City Council already has approved the plan, which would help prevent millions of gallons of untreated stormwater and wastewater from flowing into local waterways. The plan includes building a 1.1-km (0.7-mi), $374-million CSO storage project and a comprehensive street cleaning effort. The storage facility, a joint project of Seattle and King County, would prevent average annual overflows of about 189,250 m3 (50 million gal) of wastewater and stormwater. The street cleaning, scheduled to begin next year, will increase the miles of lane arterials being cleaned from 16,090 km (10,000 mi) to 32,180 km (20,000 mi), according to a Seattle Public Utilities news release.

“Street cleaning is a cost-effective way to keep neighborhoods clean and enjoyable for children and families across the city,” Mayor Ed Murray said. “Doubling street cleaning will remove tons of street dirt and its attached PCBs [polychlorinated biphenyls] and heavy metals from our streets before they run into our storm sewers. It’s an investment in the health of Seattle residents and the environmental quality of our lakes and Puget Sound.”

The goal is to remove at least 127 Mg (140 tons) of pollutants per year — about 410 dump-truck loads — from city streets before they wash into waterways. Since 2011, Seattle has been increasing its street-cleaning efforts and measuring the effects, the news release says. Seattle Public Utilities and the Seattle Department of Transportation have determined the program is a cost-effective way to capture such pollutants as copper, zinc, phosphorus, PCBs, and carcinogenic hydrocarbons before they run off into storm sewers. The program tracks cleaning activities by the minute to help manage routes and schedules and measure street dirt pickup rates, the news release says.

While streets only account for 16% of Seattle’s surface area, they contribute to more than 40% of the pollution load in stormwater runoff. Street cleaning already is proving beneficial. In 2014, the program removed 18 kg (40 lb) of copper, 36 kg (80 lb) of zinc, 77 kg (170 lb) of phosphorus, and 27 Mg (130 ton) of fine particulate matter, the news release says. During the past 4 years, street cleaning has intercepted one and a half times the amount of pollutants removed by all other water quality treatment facilities maintained by Seattle Public Utilities while costing four- to ten-times less than typical treatment technologies, the news release says.