On Dec. 2, the UK’s Department for Environment Food, & Rural Affairs and Environment Agency announced a 6-year, £2.3 billion ($3.6-billion) flood defense program with 1,400 projects from Lancashire to Essex. This first-ever long-term investment program will protect over 300,000 properties, reduce flood risk by 5%, and save the economy £2.7 billion ($4.2 billion) by 2021. The lifetime benefits of this investment will be even higher at more than £30 billion ($47.2 billion). According to the release, the program also will improve protection to 465,000 homes and businesses by the end of the decade.

However, some groups say the program does not do enough to meet the risks posed by climate change, particularly as the government plays catch-up after cutting the flood protection budget previously.

The investment program was published along with a new long-term study from the Environment Agency, which shows that the planned investment will reduce overall flood and coastal erosion risk in England.

On Dec. 9, Wales also announced £150 million ($236 million) for flood and coastal risk management initiatives. The new investment will be delivered using an innovative funding instrument, drawing on revenue budgets and building on the successful Local Government Borrowing Initiative. The scheme will deliver key flood and coastal defenses in partnership with local authorities from 2018.

“Minimizing the effects of flooding and keeping our communities safe are key priorities for this Government,” said Welsh Minister for Natural Resources Carl Sargeant. “This has already been demonstrated by the £245 million ($384 million) investment we have made during this term of Government which has been complimented by £7.2 million ($11.2 million) to repair and improve coastal defenses following last year’s storms.”

Check it Out
Supported by the European Social Fund through the Welsh Government, Built Environment Sustainability Training is delivering workforce development for the latest sustainability practices, including those on sustainable urban drainage systems and water sensitive urban design. Read more. 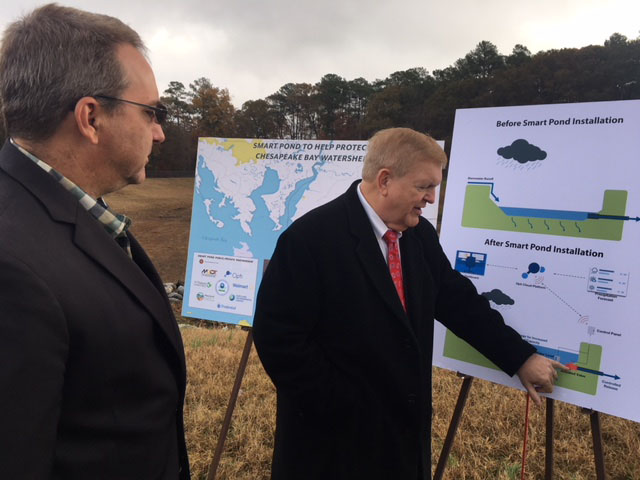 Maryland Partners With Opti and Walmart on ‘Smart Pond’ Trials