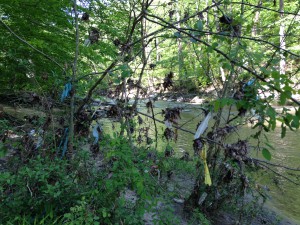 In 2010, each person who lived in the European Union (EU) used 200 plastic bags on average, according to an estimate by the European Parliamentary Research Service. Estimates also suggest that more than eight billion plastic carrier bags became litter in the EU in 2010. In a business-as-usual scenario, consumption of plastic bags is only expected to grow. However, on Nov. 21, EU governments informally agreed to draft rules to reduce plastic bag litter, focusing on the negative impacts of bags on aquatic environments in particular. Under the new rules, member states could either ban free plastic bags for shoppers by 2018 or ensure that the average consumption of them does not exceed 90 a year per person by 2019, decreasing to 40 by 2025.

The European Commission also would be required to evaluate the effects of oxo-degradable plastic materials on the environment, as these materials fragment into small particles, and propose measures accordingly.