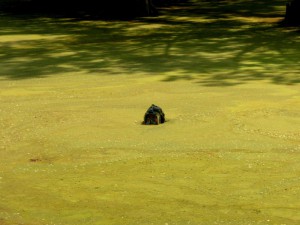 Great Lakes water quality issues received national media attention in early August as Toledo, Ohio issued warnings to nearly half a million people not to use drinking water for cooking, bathing, or consuming due to cyanobacteria toxins known as microcystins. The toxins had reached levels of about 1.0 part per billion, the World Health Organization’s limit for drinking water. The toxins are dangerous to humans and wildlife, causing gastrointestinal distress, liver damage and, at high concentrations, death in people.

The city’s drinking water comes from Lake Erie, where algal blooms have been increasing over the last decade. The lake supplies water for some 11 million people. Shallow waters that warm considerably in the summer and runoff laden with nutrients from agricultural lands and leaky septic systems contribute to harmful algal blooms (HABs) in the lake. According to a Nov. 2013 Ohio Lake Erie Phosphorus Task Force II Report, runoff from farms in the Lake Erie Basin deliver more than 60% of the lake’s phosphorus loading, about 640 grams of phosphorus per acre.

Though the Toledo ban was lifted within a few days, the problem with HABs is echoed in coastal and fresh waters around the world. According to the National Oceanic and Atmospheric Administration (NOAA), HABs cost coastal communities an estimated $82 million per year. HABs are exacerbated by climate change, which is warming waters and in some cases creating more runoff. The Lake Erie bloom is likely to persist into the fall, peaking in September. However, not all algae blooms produce toxins. According to NOAA researchers, as reported by National Geographic, about half of Microcystis blooms are nontoxic. While most water treatment plants monitor for the toxins, the options for treating them are expensive.

The Ohio Environmental Protection Agency keeps an annually updated document for public water systems on managing HABs. The 2014 draft response strategy recommends voluntary weekly sampling for microcystins and more frequent sampling if the toxin is detected in the water supply above 5 parts per billion. To prevent the problem of HABs, the agency also is involved in nutrient reduction initiatives, including developing phosphorus and nitrogen standards in line with the U.S. Environmental Protection Agency’s national nutrient criteria recommendations. Ohio lawmakers also passed S.B. 150 earlier this year, which will require farmers to receive training for commercial fertilizer use starting in 2017.

At the national level on June 30, President Obama signed legislation authorizing $82 million for research on controlling HABs across the US. The National Aeronautics and Space Administration is helping researchers monitor for algae using Landsat 8 images, which can be distinguished through slight variations in the color of coastal water. The Monterey Bay Aquarium Research Institute (MBARI) is looking even more intensively at HABs, building a detection device that can be used to map the size and toxicity of blooms to help track and even forecast HABs. Hand-in-hand with the development of an HAB detection device, MBARI researchers are developing a third generation Environmental Sample Processor. Paired with a long-range autonomous underwater vehicle, the processor can perform a variety of scientific tests when it is deployed in various waters. Read more about the device in the August 2014 issue of Environmental Health Perspectives.

Repair of Barnegat Bay Stormwater Basins Is Under Way