Increases in storm surge and sea level rise have increased the chances of water overtopping the Manhattan sea wall at least 20-fold compared to 170 years ago, according to a new study. Using old records, Portland State University and Stevens Institute of Technology researchers found that maximum water levels in New York harbor during major storms have risen by nearly 76 cm (2.5 ft) since the mid-1800s. Further, sea-level rise has increased water levels along New York harbor by nearly 46 cm (1.5 ft) since the mid-19th century. The research shows that the maximum height of the city’s 10-year storm tide has grown nearly 30 cm (1 ft) in that same period.

The newly recognized storm-tide increase means that New York is at risk of more frequent and extensive flooding than was expected due to sea-level rise alone, said Stefan Talke, an assistant professor of civil and environmental engineering at Portland State University in Portland, Ore. He is lead author of the new study accepted for publication with the Geophysical Union. The research also confirms that the New York harbor storm tide produced by Hurricane Sandy was the largest since at least 1821. Read more.

Yet, a flurry of new ideas is helping New York City to become more resilient and cope with water quality challenges. On April 3, finalists of the U.S. Department of Housing and Urban Development’s (HUD) Rebuild By Design competition unveiled their final proposals. The final 10 design teams were selected last fall from nearly 150 international submissions.

The competition is an effort to create designs that improve the resiliency of coastal communities affected by Hurricane Sandy, which are still vulnerable to the unpredictable impacts of climate change and rising sea levels. Teams in the multi-stage regional design competition, which is being held in partnership with the Rockefeller Foundation, have been working on the analysis and design for their proposals. 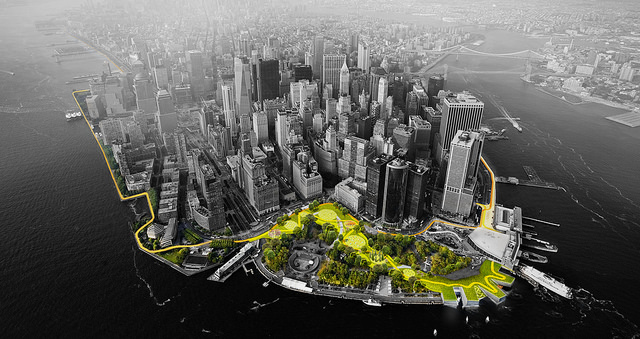 Harbor Berm at the Battery, part of the BIG U, a Rebuild by Design submission

Finalist concepts range from the BIG U, which involves a 16-km (10-mi) shield of parks around Manhattan neighborhoods, to The Blue Dunes, an offshore barrier island chain centered in the New York-New Jersey harbor. Other ideas include natural reserves, oyster reefs, and more. See the finalists’ projects here. HUD is expected to announce the winners of Rebuild By Design and an allocation of funds soon.

Other interesting and innovative ideas are coming from crowd-sourcing initiatives, including the + POOL, a free-floating public pool that will help people to swim in the East River once again. The pool will filter half a million gallons of river water every day. That water will enter the pool through filtration membranes, and the clean water will flow back out into the river.

The + POOL creators also have teamed up with Google with plans to create an app and website that make water quality data easily accessible. The creators spent 2013 testing water quality parameters, and now should be testing the filters in real-river conditions. The creators hope to have it deployed by 2016.