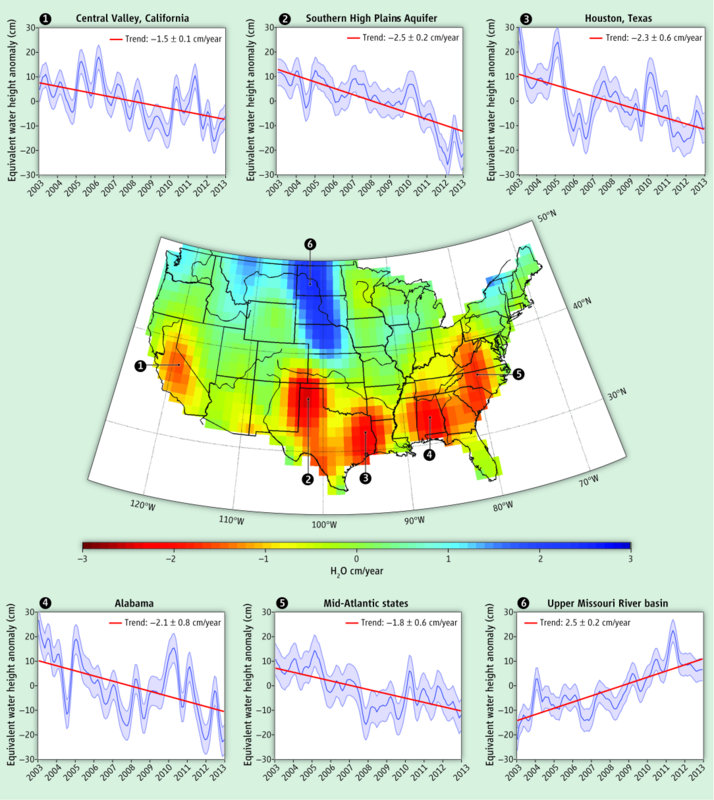 A graphic of U.S. groundwater storage trends measured by the National Aeronautics and Space Administration and the German Aerospace Center’s satellites between 2003 and 2012. This images was published in Water in the Balance, an article in the June issue of Science.

Gravity Recovery and Climate Experiment (GRACE) data from the National Aeronautics and Space Administration (NASA) provide a wealth of information to assess changes in the world’s hydrologic cycle — from groundwater depletion and drought to extreme flooding. GRACE’s satellite imagery could be used to improve water management at regional and national scales, saving lives and reducing costs associated with water-related disasters.

“Water in the Balance,” published in the June 14 issue of Science, is an analysis of GRACE data that reveals regional water trends in the U.S. According to the article, the northern half of the U.S. has become wetter, while the southern half has become even drier.

GRACE provides regular snapshots of global freshwater availability that can reveal changes in groundwater for aquifers larger than 200,000 km2 (77,220 mi2). Groundwater accounts for about half of all drinking water and is particularly important for agriculture.

However, the article identifies several vulnerable areas in the U.S. alone. California’s Central Valley and the Southern High Plains Aquifer could both be depleted within decades. Groundwater in the Houston, Alabama, and Mid-Atlantic regions is being depleted due to prolonged drought. In contrast, the Upper Missouri River basin is in danger of extensive flood damage.

The article is a collaboration between lead author Jay Famiglietti, director of the University of California Center for Hydrologic Modeling, and co-author Matt Rodell, chief of the Hydrological Sciences Laboratory at NASA’s Goddard Space Flight Center.