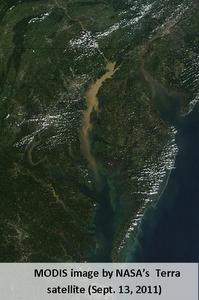 Based on initial forecasts, Superstorm Sandy, which hit the U.S. East Coast at the end of October, looked like it might produce similar results. Due to climate change, some experts anticipate that high-flow events like Sandy and Lee will become more frequent and severe, and they are a significant source of stormwater pollution.

Trouble behind the dam

In the Chesapeake Bay, high flow events further affect water quality due to aging dams on the Susquehanna River — the largest tributary feeding into the bay. The Susquehanna is also the largest source of sediment and phosphorus to the bay, and more than 91 million megagrams (100 million tons) of sediment lie behind the 84-year-old Conowingo Dam near the river’s mouth.

Over the years, sediment has filled the reservoir to about 85% of its capacity, and researchers estimate that it will be full by 2020.

“The Conowingo Dam was a very effective best management practice [BMP] controlling the input of sediment and phosphorus into the Chesapeake Bay, but this BMP is nearing the end of its useful life,” said Robert Hirsch, a USGS research hydrologist. “Those responsible for the river and for the bay are going to have to come to grips with this fact.”

As reservoir capacity decreases, so does the reservoir’s ability to trap sediment and nutrients, especially during flood events. Because of this, contributions from the Susquehanna River are already undermining efforts to comply with the Chesapeake Bay total maximum daily load, which targets sediment, nitrogen, and phosphorus.

“Even with control measures upstream, which we think are fairly effective, we are actually seeing an increase in phosphorus flowing into the bay from the Susquehanna River,” Hirsch said.

Once the reservoir reaches its sediment storage capacity, a 250% increase in sediment and 70% increase in phosphorus is expected, compared to mid-1990s levels, according to a 1997 USGS report.

“The lesson about this reservoir is the importance of monitoring BMPs and assessing their effectiveness, because effectiveness can change significantly over time,” Hirsch said. “A few decades ago, Conowingo Dam was trapping a significant amount of sediment and phosphorus. Now, it is becoming a source.”

“You can’t just assume that a BMP will continue to work the same way decade after decade; you have to monitor and analyze the data to see what is happening,” Hirsch said.

Researchers working on the Lower Susquehanna River Watershed Assessment are reviewing solutions to reservoir sedimentation. The primary option under review is reservoir dredging. However, this option is expensive; the sediments must be stable on the landscape, once moved; and they contain legacy pollutants.

Another option is allowing sediment to bypass the reservoir and moving it into the bay during late fall or winter. During this time, phosphorus is less biologically active and would be less likely to harm the bay.

Serena McClain, director of river restoration at American Rivers, estimates that there are about 100,000 dams in the U.S., many of which are older, smaller dams that have filled in.

“Dams weren’t built to manage sediment, and most don’t have sediment management plans behind them,” McClain said.

“Rivers move sediment,” McClain said. “The question is, are they moving excessive amounts of sediment due to impacts on the watershed? The dam isn’t the crux of the problem. We need to look at solutions that minimize impacts to the watershed upstream.”

And, stormwater management solutions must focus on both large and small storms. Small events, such as 1.5 year storms, generate more sediment delivery over time. However, large pulses associated with high flow events may have more immediate adverse impacts on water quality.

Unfortunately, in the Susquehanna River Basin, “sedimentation seen today is not really driven by current land use practices but by agricultural practices used 100 years ago,” Hirsch said. The sediment eroded and deposited in flood plains and reservoirs from agricultural land upstream is gradually being eroded by the storms that pass through.