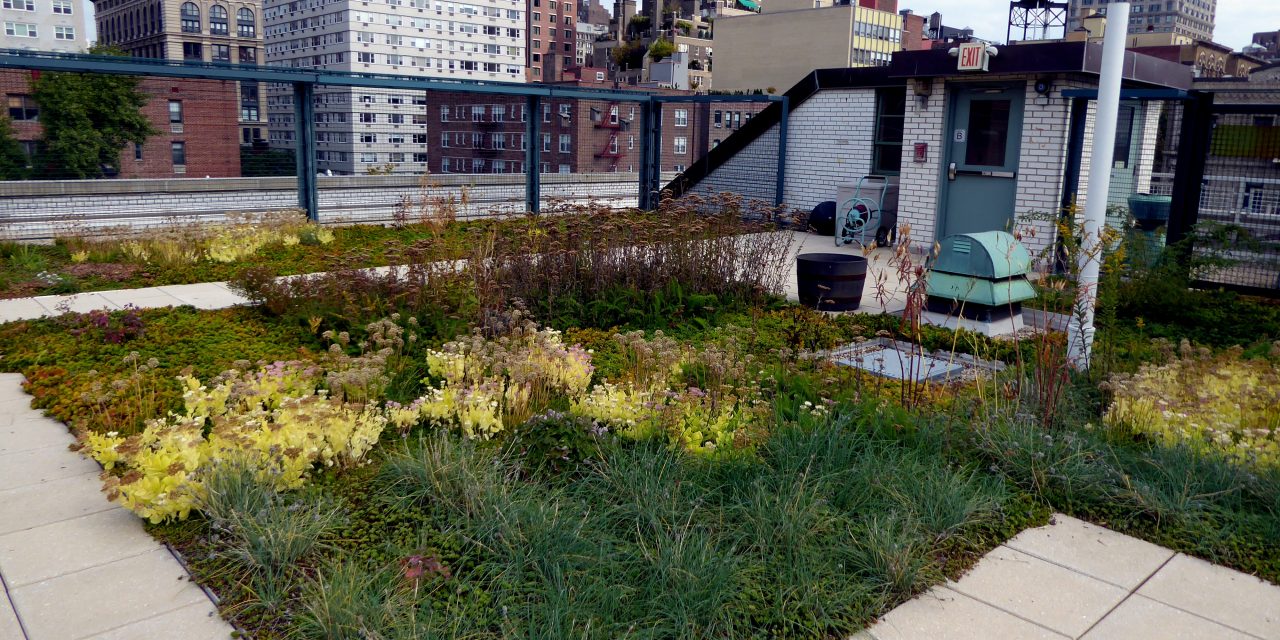 New York City contained more than 1 million buildings in 2016, constituting roughly 16,000 ha (39,500 ac) of impervious space. Of these buildings, according to a new analysis by researchers from the Nature Conservancy (New York City), The New School (New York City), Columbia University (Palisades, New York), and the Wildlife Conservation Society (Bronx, New York), only 736 contained green roofs —accounting for less than 0.1% of all buildings.

The team’s study, which appeared in the journal Ecology and Society, produces the first publicly available, citywide dataset of green roof distribution throughout New York City. Guided by findings from this analysis, authors write, governments and nonprofit groups can plan more effective initiatives to spur green roof adoption, ensuring they benefit neighborhoods most prone to urban heat-island effects, combined sewer overflows, and lack of access to green spaces. The methods the researchers use to develop their analysis also can help planners in other cities assess green roof coverage as well as provide a means to track green roof adoption over time, the researchers write.

“If we are going to meet our goals for climate adaptation, sustainability, and equity, we have to invest more in our green roofs alongside other green spaces,” said co-author Timon McPhearson, professor of urban ecology at The New School, in a release. “The unmet opportunity to transform the flat roof space in New York City is vast. Mobilizing city resources to expand green roofs, especially in underserved neighborhoods, could go a long way towards cooling the city, improving stormwater resiliency, and providing new recreation spaces.”

Previous studies have attempted to quantify green roof coverage in New York City on a neighborhood-by-neighborhood basis, the researchers describe. But for a truly citywide assessment of green roofs, the study team turned to New York state’s rich database of publicly available satellite imagery, which covers virtually all parts of New York City at resolutions as high as 15.2 cm (6 in.).

From this record, the researchers identified images depicting a birds-eye-view of 155 buildings that clearly featured green roofs. They used these images to train a machine-learning model that would pore over the millions of other overhead shots of New York City rooftops in search of buildings that looked similar to the ones the team identified.

“Companies and building owners have installed green roofs in an effort to retain stormwater, but there is no central registry of these installations,” study co-author Greg Yetman from the Columbia University Climate School said in a release. “Detecting the roofs from imagery was an ideal way to locate both large and small installations without having to survey building owners.”

In selecting these “training rooftops” the machine-learning model would use, the team had to exercise caution to ensure that the vegetated structures they were looking at were truly part of the roofs on which they sat rather than, for example, arrangements of potted plants or artificial turf, they describe in their study. They also trained the model on approximately 1.3 ha (3.2 ac) of regular, non-green roofs to teach it what not to look for.

Although authors caution that their analysis likely missed some green roofs existing in 2016 and that the number has likely fluctuated significantly since the imagery was gathered, they found that green roofs occupied only about 25 ha (62 ac) citywide. These existing roofs were unevenly distributed, with more than 50% concentrated in Manhattan. Citywide, neighborhoods identified as most vulnerable to urban heat-island effects were notably underserved by green roofs, with 22 of these neighborhoods containing less than 10 green roofs and four containing none at all. Neighborhoods with the highest number of green roofs were typically served by combined sewer systems, providing evidence that minimizing runoff volumes in areas prone to flooding — rather than lowering surface temperatures — is the primary environmental driver for green roof adoption in New York City, according to the study.

The rate at which cities adopt green infrastructure, as well as where they choose to install it, largely depends on the extent of municipal development policies, the researchers write. In New York City, for example, study authors believe green roof coverage in 2016 was largely a product of two mayoral initiatives: PlaNYC, a set of incentive programs including one specifically for green roofs introduced in 2007 under Mayor Michael Bloomberg; and OneNYC, a measure introduced under Mayor Bill de Blasio which included a tax abatement program for green roofs.

Researchers believe the number of green roofs built since their 2016 analysis likely is significant. This is due to several recent New York City green infrastructure initiatives including a set of grant programs targeting urban heat-island effects established in 2017 as well as NYC Local Laws 92 and 94, a pair of measures enacted in 2019 that require green roofs or solar panels on all newly constructed or substantially expanded or renovated buildings.

While these types of programs go a long way toward making green roofs a more attractive option for developers, described lead study author and Nature Conservancy scientist Mike Treglia, heeding the findings of studies like this one can help New York City legislators and urban planners carry out targeted efforts to ensure the areas most in need of the benefits green roofs can provide receive them. Planners in other cities can also use the combination of satellite imagery and machine learning the team used in this study to assess green infrastructure needs in other settings, he said.

“This information, as well as insights on the types of buildings we see green roofs on … is ultimately invaluable in working with policymakers, advocates, and researchers to expand green roofs, particularly in areas where they are most needed,” Treglia said in a release.

Read the full study, “Examining the distribution of green roofs in New York City through a lens of social, ecological, and technological filters,” in Ecology & Society.

Check it Out! EPA Modeling Tools for TMDLs