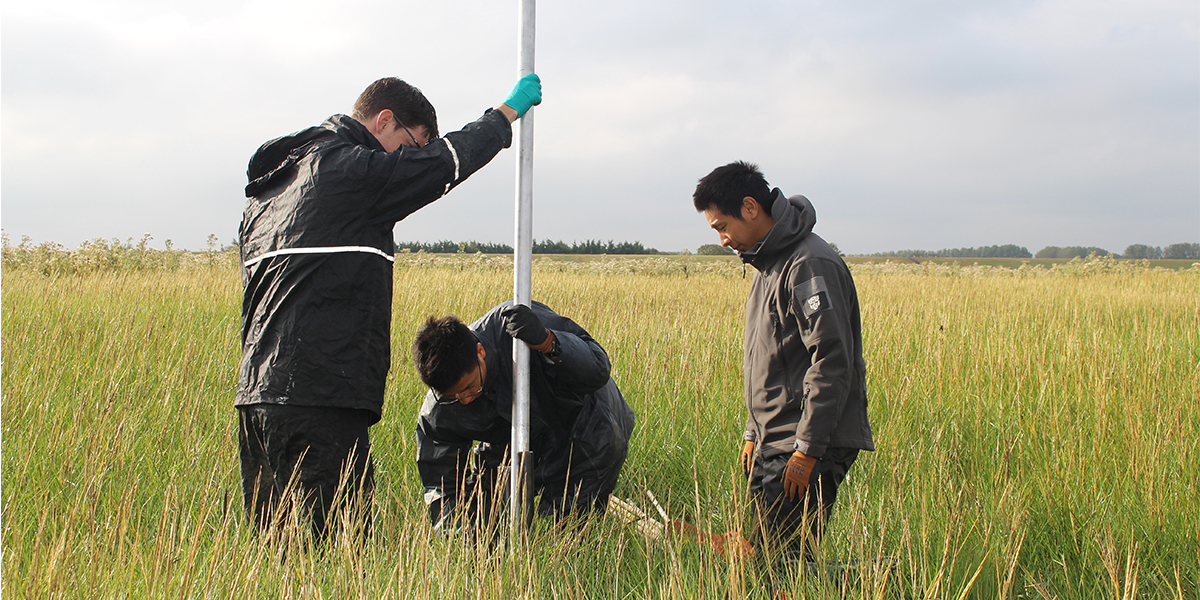 Salt marshes — coastal wetlands common to northern parts of the globe that flood and drain with the movement of ocean tides — are prized for their ability to protect coastal communities by shrinking and slowing ocean waves. However, according to a recently published study, contemporary and historical data underscore an even more important function of these unique ecosystems.

Past, Present, and Future Protection

The international research team focused on the Netherlands for its study because of the country’s unique susceptibility to coastal flooding, its extensive network of seawalls, and its wealth of available data detailing historical flood events. By comparing both contemporary and historical salt-marsh coverage with the size and effects of seawall breaches, the researchers argued that the link between salt marshes and fewer seawall breaches has been evident for centuries even if never explicitly documented.

Using comprehensive primary sources, the team analyzed the effects of two major floods affecting Northwest Europe caused by extreme storms: the 1717 Christmas Flood, which drowned as many as 14,000 people and destroyed entire villages; and the 1953 North Sea Flood, which raised water levels higher than 5 m (16 ft) above average in some areas.

“Salt marshes not only reduced the number and total width of dike breaches during the 1717 Christmas Flood, but were also found to confine the breach depth during the 1953 North Sea Flood,” Zhu said. “Especially the latter, previously unknown function of natural defenses, can greatly reduce flood damage by lowering inundation depth.”

After considering historical analyses alongside wave-sensor measurements from two recent heavy storms affecting the Dutch Wadden Sea in 2015 and 2017, the team then incorporated standard SLR projections to predict salt-marsh performance under different scenarios. For example, modeling by the team suggested that under an extreme, 1-m (3-ft) SLR scenario, a 200-m (650-ft)-wide seawall breach during a heavy storm could cause a 25% fatality rate in communities behind bare seawalls. Maximizing salt-marsh coverage in front of seawalls could minimize the expected fatality rate to as little as 2% in the same scenario, study authors write.

“Flood defenses combining green and gray features are actually more beneficial than considered earlier,” Zhu said. “Beyond wave attenuation, salt marshes can lower flood impacts simply by limiting the size of dike breaches and continue to do so under sea-level rise.”

Making the most of salt marshes would ideally involve preserving or developing marshes in front of seawalls to act as a wave buffer, the researchers write. However, this may not be possible in every environment. As an alternative, the team proposes a new type of coastal countermeasure that would not only eliminate the need for coastal communities to block ocean views by continually heightening seawalls, but also provide critical habitat for an array of rare and endangered wildlife.

The design, described in an animated video produced by the Royal Netherlands Institute for Sea Research (Yerseke), features two sets of seawalls with a vast layer of salt marshes between them. The second seawall, built on the ocean rather than on the coast, would remain open to allow the salt-marsh habitat to develop. In anticipation of heavy storms, the seawall would close. Although the researchers note that the design would reduce the salt marsh’s ability to mitigate waves, the arrangement would make the coastal seawall more stable while counteracting hazards associated with SLR, the study describes.

Read the team’s study, “Historic storms and the hidden value of coastal wetlands for nature-based flood defence,” in the journal Nature Sustainability.