Eastern U.S. coastal communities are particularly sensitive to ice-melt in the Arctic Sea, according to hydrologist David Vallee.

Vallee, the Hydrologist-in-Charge at the National Weather Service’s Northeast River Forecast Center (Norton, Massachusetts), was one of three stormwater experts to discuss the effects of climate change on coastal and riverine areas of the eastern U.S. during an April 23 webcast hosted by the Water Environment Federation (WEF; Alexandria, Virginia) Stormwater Committee.

Over the course of two hours, panelists discussed three zones of the East Coast and topics such as improving data quality, rebuilding for resilience, and partnerships for preparation.

Vallee provided details about climate change along the northeastern coast.

Because Artic Sea ice has decreased dramatically in both coverage and thickness over the last 30 years, Vallee explained, atmospheric jet streams that transport weather systems are carrying more water vapor and sea levels are on the rise.

At the same time, decreasing ozone coverage is resulting in increasingly warmer average temperatures in many world regions. In the northeast U.S., for example, the top six warmest years on record have all occurred since 1990, Vallee said. As the region’s climatic conditions begin to look “reminiscent of what Delaware, for example, looked like in the 1940s and ‘50s,” northeastern states are facing new hazards typically seen only in more tropical climates, Vallee said. Last summer, for example, the region experienced the largest outbreak of the mosquito-borne disease eastern equine encephalitis (EEE) on record in the U.S. since the 1950s. More humid conditions also mean extreme precipitation events occur more frequently.

Julia Rockwell, who manages the Philadelphia Water Department’s (PWD) Climate Change Adaptation Program, reported similar increases in the frequency and severity of recent flooding. Philadelphia, which sits along the banks of the Delaware and Schuylkill rivers, grapples with flooding and combined sewer overflows that occur when parts of the city’s more-than-100-year-old collection systems become overwhelmed during heavy storms, Rockwell described.

Compared to global averages reported by such groups as the U.S. National Oceanic and Atmospheric Administration (NOAA) and the Intergovernmental Panel on Climate Change (IPCC), Philadelphia’s current rate of sea-level rise along the Delaware River is in fact almost 50% higher, Rockwell said.

“That is largely due to the fact that land is actually subsiding along the northeast coast of the United States. As this land is sinking, we will be experiencing the effects of sea level rise to a greater extent than other areas around the country and around the globe.”

Water from all sides in South Florida

Sea-level rise is of paramount importance to low-lying Miami, Florida, which has been called the “ground zero” of climate change, said Keren Bolter, who helps municipalities improve their urban and coastal resiliency alongside colleagues at Arcadis (Plantation, Florida). According to all major global climate models (GCMs), much of Miami and Miami Beach are expected to sink below sea level by 2100 unless the warming rate slows.

In addition to higher tides and greater storm-surge risks, South Florida also must consider water from below. Heavy rains can result in groundwater rise, a phenomenon that sees the region’s shallow groundwater reservoirs overflow. Groundwater rise can not only lead to flooding, but also saltwater intrusion that affects water quality, public health issues related to standing water, and negative effects on property values.

The experts underscored ways they are working to better understand how future climate change effects might manifest at the local scale by the end of the 21st century.

For example, the PWD Climate Adaptation Team developed a method to combine output from nine GCMs with 117 years of rainfall data from a rain gauge at the Philadelphia International Airport. The method provides a high-resolution estimate of future rainfall patterns over the next 80 years in Philadelphia, which can be used to inform infrastructure design and flood risk management planning. Predictive PWD tools such as this one are already being used to plan resilience efforts, Rockwell said. An inundation analysis, for example, showed that although sea-level rise alone will not overwhelm critical infrastructure at Philadelphia’s Southwest Water Pollution Control Plant by 2060 under an intermediate-high climate change scenario, storm surge effects could cause major disruptions during heavy storms. PWD is  now focusing infrastructure resilience planning efforts, considering strategies like hardening and retrofits, at facilities facing the greatest potential risk, Rockwell said.

Scientists, environmental managers, and legislators from coastal communities in South Florida convene regularly to produce an updated unified sea-level rise projection for the region based on GCM data every five years, Bolter said.

These projections work in tandem with other initiatives to help South Florida municipalities prioritize preparedness measures. Miami, for example, developed a “social vulnerability index” that details where expected flooding increases may affect the largest amount of people, or residents in low-income areas who may not have the resources to recover from flood-related property damage. The city used this data to implement a voluntary buy-out program for landowners in flood-prone areas to facilitate proactive relocation, Bolter described.

Vallee described how new development projects in many northeastern cities are now required to plan for flooding at the conceptual level, such as by requiring that new condominium complexes reserve their first two floors for parking rather than habitation. In Miami Beach, any new critical infrastructure must now be sited at least 2.6 m (8.4 ft) above the water table, Bolter said. South Florida municipalities are also raising roads and improving pumps, cisterns, and other grey infrastructure.

Many flood management professionals are also enhancing the ability of natural valleys to store rainwater and implementing such green infrastructure measures as bioswales and porous pavements. Critical infrastructure managers along the northeastern coast are taking an “elevate and evacuate” approach, Vallee said, identifying key systems and exploring ways to relocate them.

“Project by project, piece by piece, these practices are having a benefit and playing a critical role in sustaining these communities and making them more resilient against the onslaught of these intense rainfall and ocean-driven events,” Vallee said.

Comprehensive planning for a phenomenon as impactful as climate change cannot be done by any one person, agency, or country. Webcast speakers assured listeners that helpful resources exist to aid in their climate-change planning and that cooperation between agencies and cities is key.

Vallee mentioned NOAA’s National Water Model, a frequently evolving tool that predicts future hydrological behavior across the continental U.S. Within the next 3-5 years, Vallee said, the National Water Model will be able to translate historical data into real-time, local-scale flood risk assessments. It will not only be able to provide information on the areas likely to be affected by flooding, but also the depth of that flooding, a detail which could help emergency response planners decide on mitigation and rescue tactics, Vallee said.

WEF members can access a recording of the webcast, “Climate Change: From Theory to Stormwater Practice,” for free online. Non-members can purchase the recording for $40.

WEF offers a constantly growing collection of webcasts on a variety of industry topics. Click here to learn more. 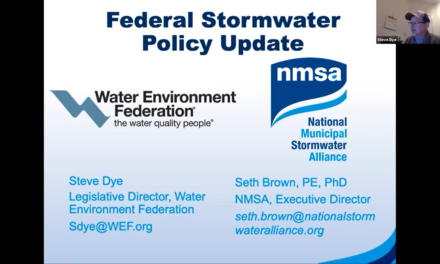