Each year, EPA collaborates with stormwater experts from the Water Environment Federation (WEF; Alexandria, Virginia), the American Society of Landscape Architects (Washington, D.C.), and the American Society of Civil Engineers (Reston, Virginia) to judge the entries. For this year’s competition, six volunteers from the WEF Stormwater Committee participated as judges.

“It is comforting to know that those of us entering our twilight years can rest assured knowing that a new, high caliber of young people will be taking over the mantel of rainwater, stormwater and watershed management, with a determination to continue national efforts to protect and preserve our hydrology cycle, surface water quality, water supply, and aquatic systems and people linked to water,” said Neal Shapiro, watershed program coordinator for the City of Santa Monica, California, and one of the WEF Stormwater Committee judges.

“This year’s review indicated that a multi-disciplinary team can lead to a more well-rounded design and that students are able to utilize classroom concepts to develop stormwater management solutions for the benefit of the campus and wider community,” added Suha Atiyeh, project manager for the District of Columbia Department of Transportation who also represented the WEF Stormwater Committee as a judge. “Congratulations to this year’s winners and congratulations to all the teams for submitting entries which embodied the application of innovative stormwater management solutions beyond the classroom.”

The winning project in the Master Plan category, titled “Coastal Eco-Waters: Adapting for a Resilient Campus,” was submitted by students from Florida International University (FIU; Miami).

Particularly during hurricane season, FIU’s Biscayne Bay campus experiences frequent inland and coastal flooding, members of the team describe in a video about their project. By 2050, the U.S. National Oceanic and Atmospheric Administration (NOAA) estimates that sea levels along Florida’s eastern coastline could rise by as much as 0.7 m (2.2 ft), which the team explains would also raise the local water table and overwhelm the nearby wetlands that the campus relies upon for flood protection.

According to project documents, NOAA modeling tools indicated that the team’s proposed interventions would diminish runoff-related water pollution by removing up to 84% of total suspended solids and 66% of metals in runoff compared to current conditions. An array of 13 green roofs would capture about 34.8 million L (9.2 million gal) of runoff per year for potential reuse applications, the team describes in its submission.

Second place in the Master Plan category went to a team from the University of Arizona (Tucson) for a project titled, “Against the Grain.”

During the Sonoran Desert’s rare rainy months, the University of Arizona campus currently misses potential for runoff capture and use, instead diverting heavy rainfall off-campus as efficiently as possible, the team describes in its submission video. Not only can the current practice cause flooding issues in other parts of Tucson, the team explains, but it can also turn the campus’ widest roads and walkways into untraversable “temporary rivers.”

At the same time, most of the main thoroughfares for pedestrians and cyclists on campus run east-west, resulting in “awkward” movement patterns for students traveling north-south, the team says.

The team’s project addresses both issues – one environmental and one social – by carving three new, north-south pedestrian and bicycle corridors designed to divert surface-level runoff into a series of basins that slow, capture, and infiltrate it. The design consists of GI elements including rain gardens with native vegetation, curb cuts, sidewalk scuppers, and bioretention facilities.

According to the team’s performance estimates, implementing the design on campus would result in a 19% decrease in peak flow and a 40% runoff capture rate for a 2-year storm event, a 71% increase in average runoff concentration time, and as much as 19.6 ac.-ft. of stormwater storage capacity for reuse in irrigation by installing cisterns.

Learn more about the University of Arizona team’s project, “Against the Grain”:

A team from the University of California, Los Angeles (UCLA) earned first place in the Demonstration Project category for “Little Steps to a Sustainable Future,” involving plans for retrofits and redesigns on the campus of a local elementary school.

During heavy storms, the mostly impervious Brockton Elementary campus routinely floods, keeping students at home while necessitating costly repair work, the team describes in its video submission. At the same time, demand for stressed water supplies continues to grow in Los Angeles, where stormwater runoff is the primary source of local water pollution.

The team focused on flood mitigation with a particular emphasis on runoff capture and use. Their recommendations call for a 700-m2 (7,600-ft2) green roof consisting of drought-tolerant dune sedge grass, three bioretention areas aimed at removing silt and pollution, four natively planted rain gardens, and about 450 m2 (4,800 ft2) of permeable pavement that drains into a large, underground cistern.

Each GI installation would also include educational signage in both English and Spanish that teach students and faculty about the nature-based systems at work in their community, project documents detail. As part of the project, team members visited classrooms at Brockton to demonstrate the filtration process for students using simple terms and hands-on models.

Learn more about the UCLA team’s project, “Little Steps to a Sustainable Future”:

Students from Arizona State University (ASU; Tempe) also focused their project on a local elementary school, earning second place in the Demonstration Project category. The project, titled “Ready! Set! Activate!”, would redesign the playground at Paideia Academy in South Phoenix to improve both stormwater management and the student experience.

In all, the proposed design increases stormwater retention volumes by about 65% and introduces at least 15 native plant species, distributed throughout an array of new rain gardens, bioretention areas, and bioswales. 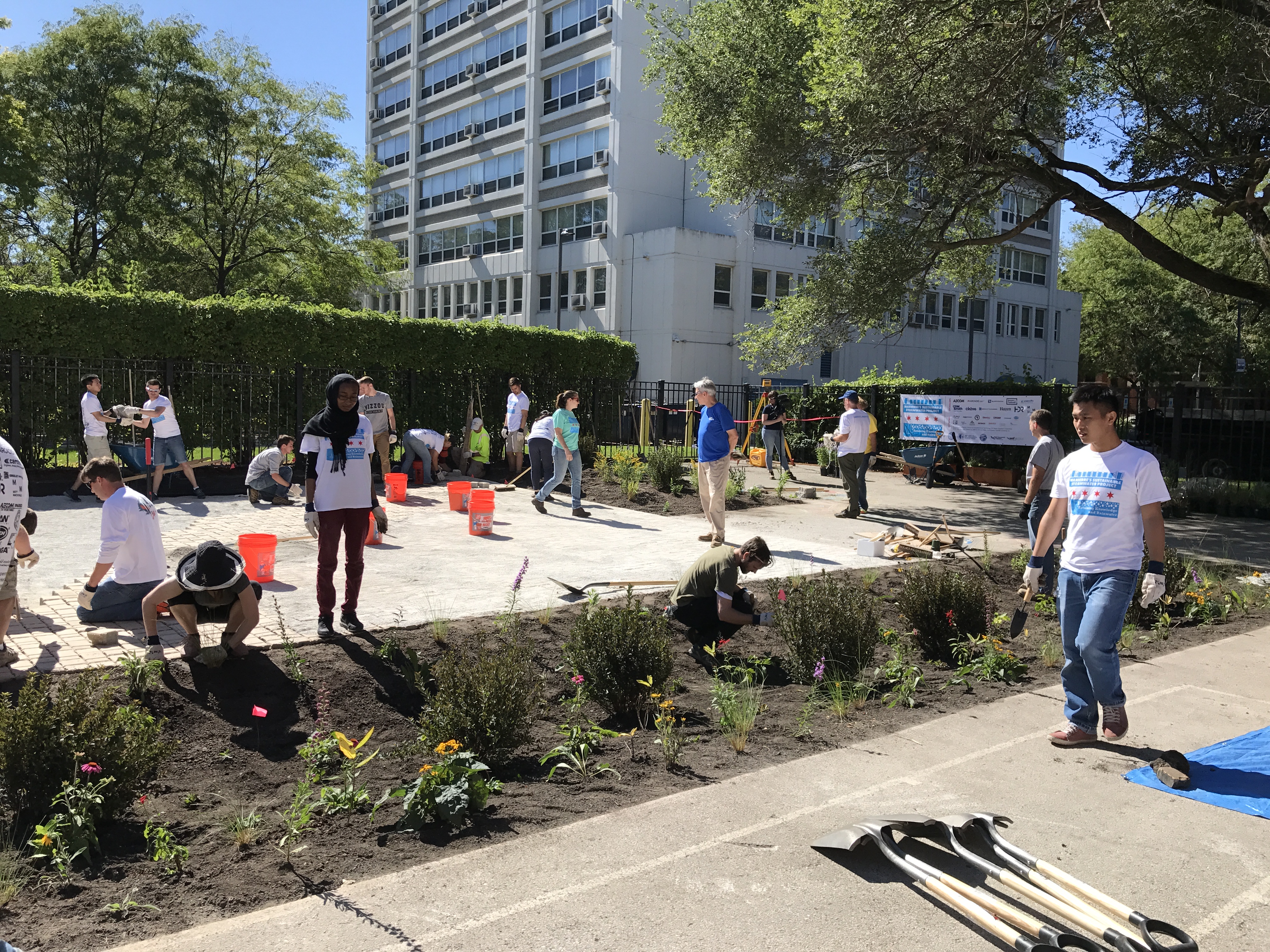