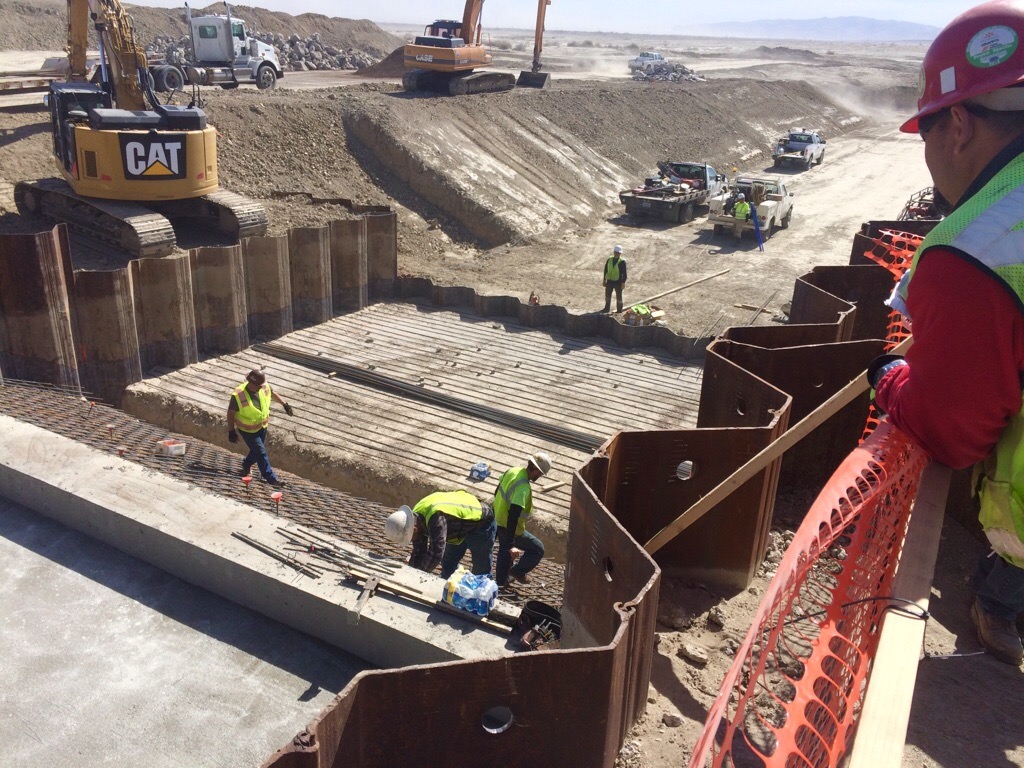 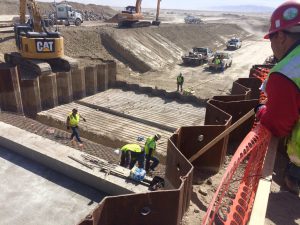 A record-breaking amount of snow will continue to melt from the Sierra Nevada mountains through August, sending as much as 700,000 ac-ft of water toward the City of Fallon, Nev. Construction crews from federal, state, and local governments cooperated with area landowners between February and May to build a series of flood prevention measures quickly. City of Fallon, Nev.

A record-breaking accumulation of snow on the Sierra Nevada mountains is melting steadily as temperatures continue to warm and the thaw continues.

That’s both good and bad news for Nevadans — while snowmelt represents one of the most reliable sources of drinking water for the dry West, this year it could bring up to 2.5 times the amount of water that the Lahontan Reservoir, outside Carson City, is equipped to handle, according to estimates from the Churchill County Emergency Management Department (EMD).

That much water would overwhelm the Carson River, which usually carries Sierra Nevada runoff away from settled areas, through nearby Stillwater National Wildlife Refuge and into the Carson Sink. Without intervention, 37 homes and farms would be in danger of severe flooding.

The partnership managed to excavate the emergency trench, aptly named “the Big Dig,” in just 6 weeks.

Race against the thermometer 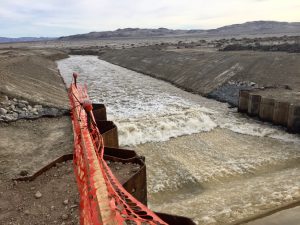 To prepare for an immense inflow of snowmelt from the Sierra Nevada mountains, the Truckee–Carson Irrigation District led the construction of the V-Line Emergency Spillway. The spillway can redirect about 28 m3/s (1000 ft3/s) away from populated areas if the Lahontan Reservoir overflows. City of Fallon, Nev.

“We tossed around four or five different alternatives, and we decided this was the most likely to work,” Lawry said. “And the good news is it’s here forever. However it comes off, we’ll handle it, and hopefully all our pre-planning and our work pays off and we can slide through this thing with minimal problems.”

Construction crews from Churchill County, the City of Fallon, the Truckee-Carson Irrigation District, the U.S. Bureau of Reclamation, the Nevada Department of Transportation, and other agencies worked alongside about 30 local landowners to move about 1.9 million m3 (2.5 million yd3) of dirt for the project.

The Big Dig is only the latest flood prevention measure hurriedly built by the construction crews in an ongoing race against the thermometer.

In February, workers cleared brush and debris from the Carson River channel downstream from the Lahontan Reservoir to increase the channel’s flow capacity to about 28 m3/s (1000 ft3/s) from about 11 m3/s (400 ft3/s). Officials expected the clean-up job to take more than 40 days to complete; with many helping hands, it took only seven.

In March, crews built the $600,000 V-Line Emergency Spillway, which redirects about 28 m3/s (1000 ft3/s) from the Lahontan Reservoir into the open desert, passing beneath U.S. Highway 95 and into the Carson Lake. As the lake filled more quickly than anticipated, the crews rushed to build an emergency dike in just 2 days to protect surrounding properties. After that, the Big Dig was conceived as a more permanent solution.

With the Big Dig’s completion in early May, water from the spillway now flows into the Carson Sink.

“Everything that happened on this project was expedited and needed to be,” Fallon Mayor Ken Tedford told KOLO-TV. 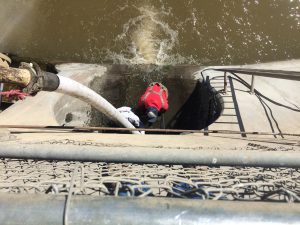 Both the Carson River and the Big Dig eventually deposit Sierra Madre snowpack into the Carson Sink, a large desert depression used to collect outflow from the Truckee–Carson Irrigation District. From the sink, water is evaporated or retreats into the ground. City of Fallon, Nev.

The City of Fallon and EMD provide regular updates detailing how the newly built flood management measures are handling the snowmelt. As of May 23, a staggering 395,560 ac-ft of water — almost 488 billion L (129 billion gal) — had been released from the Lahontan Reservoir since the snow began to melt. Inflow to the reservoir from the Sierra Nevada was about 85 m3/s (3020 ft3/s).

The partnering organizations expect to work against severe snowmelt-related flood risks through August of this year. By that time, emergency management officials estimate that the Big Dig and related projects will handle as much as 700,000 ac-ft of water — enough to cover the entire state of Rhode Island with a foot of water, reports the Reno Gazette-Journal.

EMD continues to stress that proactive collaboration was key to prevent possible property damage and loss of life.

“[The Big Dig project] is made possible because of the cooperation of local governmental entities and many local individuals who have worked to improve, and in some cases, build new infrastructure to protect the community,” EMD said in an update. “Lahontan Reservoir continues to do her part and the citizens of the community who have participated unselfishly are greatly appreciated.”