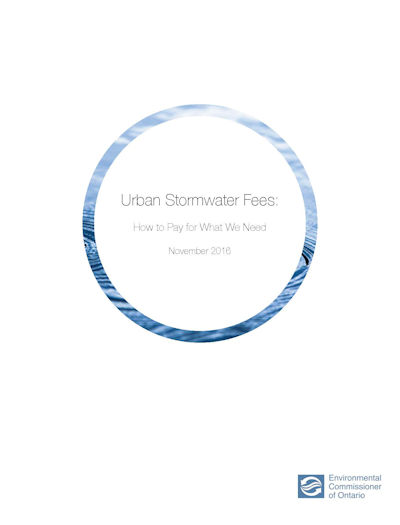 According to the latest installment of Canada’s annual Canadian Infrastructure Report Card, more than 650 stormwater-related urban floods throughout the country levied damages to more than 66,000 private properties between 2009 and 2016.

To help prevent these damages, fix existing stormwater infrastructure, and accommodate future growth, the office of Dianne Saxe, Environmental Commissioner of Ontario (ECO) published the report, titled Urban Stormwater Fees: How to Pay for What We Need. The report, released on Nov. 15, offers the Ontario government four recommendations poised to make stormwater programs not only effective at reducing flood severity and frequency, but also cost-effective.

In the report, Saxe argues that, in addition to aging stormwater infrastructure, urban development pressures, and climate change, “decades of declining investment” have left municipalities in Ontario unable to control stormwater efficiently.

To fix existing stormwater infrastructure and to accommodate future growth, the report says, Ontario’s municipalities must find ways to close a financial gap of about $6.8 billion — a deficit that could grow even larger without rehabilitative action in the near future.

The first step toward stormwater funding reform, Saxe says, should be for the Ontario government to introduce measures requiring its cities to recover the full costs of stormwater management from utility customers.

According to a press release, Saxe’s office surveyed municipalities in the province and found that only about 35% currently recover the full costs of managing stormwater.

“Funding stormwater out of municipal property taxes, the most popular method used in Ontario, simply has not worked,” the ECO report says. “Even more important, funding stormwater management out of taxes gives no incentive to public or private property owners to limit the runoff and pollution they create, and to protect the natural areas and green infrastructure that absorb stormwater.”

Because it can be difficult to recoup costs without accurate information behind what those costs are — and because a recent survey found that about 40% of municipalities in Ontario lack definitive protocols to gauge the efficiency of stormwater programs and infrastructure — the ECO report calls on the Ontario government to require municipalities to develop comprehensive asset management plans.

In doing so, each municipality can not only estimate the costs it must offset to fully recover stormwater management spending, but also identify potential opportunities to streamline and improve service quality, the report says.

To sufficiently address the deficit facing Ontario cities, municipal governments can no longer approach stormwater control as an afterthought in city planning. In the footsteps of many major cities in the U.S., the U.K., and elsewhere in Canada, the ECO report calls on the Canadian Ministries of Municipal Affairs and the Environment and Climate Change to assist municipalities in the implementation of stormwater fees for customers if the introduction of such fees is deemed necessary.

Fees would scale with the runoff volume of each individual customer instead of the current system, which charges property owners a small, flat rate as part of property taxes. In such Ontario cities as Kitchener, Waterloo, and Mississauga, which already charge dedicated stormwater fees, the fees generally range from about $4 to $15 each month for a single-family residence.

“[Stormwater fees] are a more equitable way to finance stormwater management, because they implement the polluter pay principle. It requires those who create the most runoff to pay for their proportional share,” the report says.

To facilitate any possible changes in funding strategy, the ECO report calls on the Canadian Ministry of the Environment and Climate Change to follow through on previously outlined policy initiatives related to flood prevention.

Among these measures are the development of a response framework pertaining to the effects of climate change, the re-examination of municipal stormwater control best practice standards, and an update of the 2003 Stormwater Management Planning and Design Manual.

“Without better municipal funding models for stormwater, our future will include more overland and basement flooding, sewage bypasses, beach closure days, and sediment in lakes and rivers,” Saxe summarizes in the report.