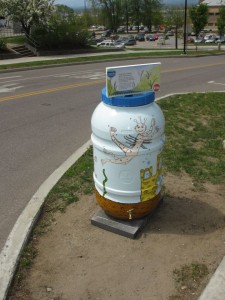 A new state law in Colorado, signed by Governor John Hickenlooper on May 12, now allows for the limited use of rain barrels for the purpose of rainwater harvesting. The signed bill became effective Aug. 10, 2016.

The new law allows for a total of two rain barrels with a maximum storage capacity of 416 L (110 gal). The law includes a statement that rain barrel use is not considered a water right and is not intended to encroach upon the prior appropriation doctrine. The law further restricts the use of rain barrels to residential and/or multifamily residences. The law does not allow the use of larger rainwater harvesting systems.

The law also includes a provision that allows the Colorado Department of Natural Resources state engineer to restrict rain barrel use should it be determined that their use effects (or will effect) downstream senor water rights. The state engineer also is required to provide two reports to the Agriculture Committee of Colorado General Assembly by March 1, 2019, and March 1, 2022, regarding whether the use of small-scale residential harvesting systems has caused any discernable injury to downstream water rights.

Proponents denoted the common sense approach of the new law. However, they faced substantial challenges in prior years as the proposed legislation stalled in two prior general assembly sessions.

Mayors Meet With EPA to Discuss Integrated Planning and Affordability