According to a press release announcing the plan, London has lost 17% of permeable surfaces in the last 40 years. The trend of homeowners paving their front gardens has driven more runoff into London sewers, which are already 150 years old.

Modeled drainage and sewerage capacity show that future population growth and climate change put London at risk of major flooding by 2050. The plan identifies potential flooding hotspots across the city and proposes to divert rain away from sewers with sustainable urban drainage systems (SuDS). Without action, England’s capital could be vulnerable to flooding even during normal rainfall. 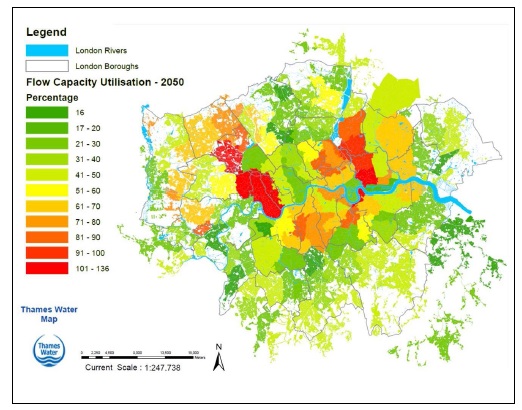 Modeled drainage and sewerage capacity to manage future population growth and climate change for the 2050s. Image by Thames Water

“Sustainable drainage is a win-win for London — reducing flood risk while also increasing the amount of green space in our city, which is great for providing new community spaces, improving air quality, and beautifying our streets,” said Deputy Mayor for Environment and Energy Matthew Pencharz.

Pencharz launched the draft plan at a new rain garden in Tower Hamlets. Formerly, the site was the dead-end of a public highway that attracted illegal dumping and antisocial behavior. However, the site is now a public space replete with edible plant gardens and outdoor seating that will serve as a flood defense as well as a new bicycle route.

In addition to the mayor’s action plan, Thames Water launched a £20 million campaign, Twenty 4 Twenty, to transform at least 20 ha of impermeable surfaces into green spaces that double as SuDS. The initiative will focus on communities served by combined sewers and seeks to transform areas dominated by concrete using rain gardens, natural drainage, and permeable paving.

Twenty 4 Twenty is part of Thames Water’s long-term program to reduce strain on its sewerage network as population grows, towns and cities become more urbanized, and climate changes. At the same time, the company is modernizing its sewerage system by constructing the Thames Tideway Tunnel to protect the River Thames from sewer overflows.