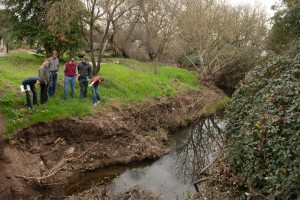 Professor Richard Luthy and a team of graduate students survey a creek in Sonoma County, Calif., as part of a study on stormwater capture and reuse. Image by Linda A. Cicero / Stanford News Service

In an effort that could serve as a template for semiarid regions across the world, researchers are working with local and federal agencies in Los Angeles, Sonoma, and other drought-stricken California cities in an unprecedented effort to capture and reuse stormwater. Research focuses on finding stormwater recovery technologies that are suited to the episodic downpours common to semiarid regions such as the American West. The approach is part of efforts both to combat water shortages and improve water quality.

The research is being conducted within the Engineering Research Center for Re-Inventing the Nation’s Urban Water Infrastructure (ReNUWIt), a partnership of multiple universities and private industry under a National Science Foundation agreement. The group is identifying new ways to supply urban water and treat wastewater efficiently and sustainably.

According to researchers involved with the project, conservation alone will not be sufficient to meet the demands of arid regions’ growing populations. Reusing stormwater captured in just two metropolitan areas — San Francisco and Los Angeles — has the potential to fulfill the annual indoor water demand of about 10 million people.

In Los Angeles, ReNUWIt researchers are helping develop a project that would convert 19 ha (46 ac) of abandoned quarry into a park that doubles as a stormwater capture and treatment facility. It will provide rare green space in a low-income neighborhood full of salvage yards and auto body shops.

In Sonoma, ReNUWIt researchers are also examining city planning, implementation factors, and community preferences to identify the best sites for locating stormwater capture, treatment, and groundwater recharge systems. The initiative aims to provide communities with a template for stormwater capture and treatment systems that operate with minimal upkeep, double as parkland, recharge underground aquifers, and restore ecosystems. At the Sonoma Valley Wastewater Treatment Plant, researchers also are testing various stormwater controls for their ability to remove nutrients and other contaminants.

At another site, researchers are studying a vegetated stormwater capture pond that doubles as an animal habitat where sunlight deactivates some waterborne pathogens and organic contaminants. A combination of natural or charcoal-based filters remove additional contaminants, such as nitrates, phosphorus, and agrochemicals. Weather forecasts inform sensors and actuators on how long the pond should hold water, and the speed at which water is filtered to optimize pollutant removal before routing it into a groundwater aquifer.

Proposal To Reduce Chloride in the Twin Cities