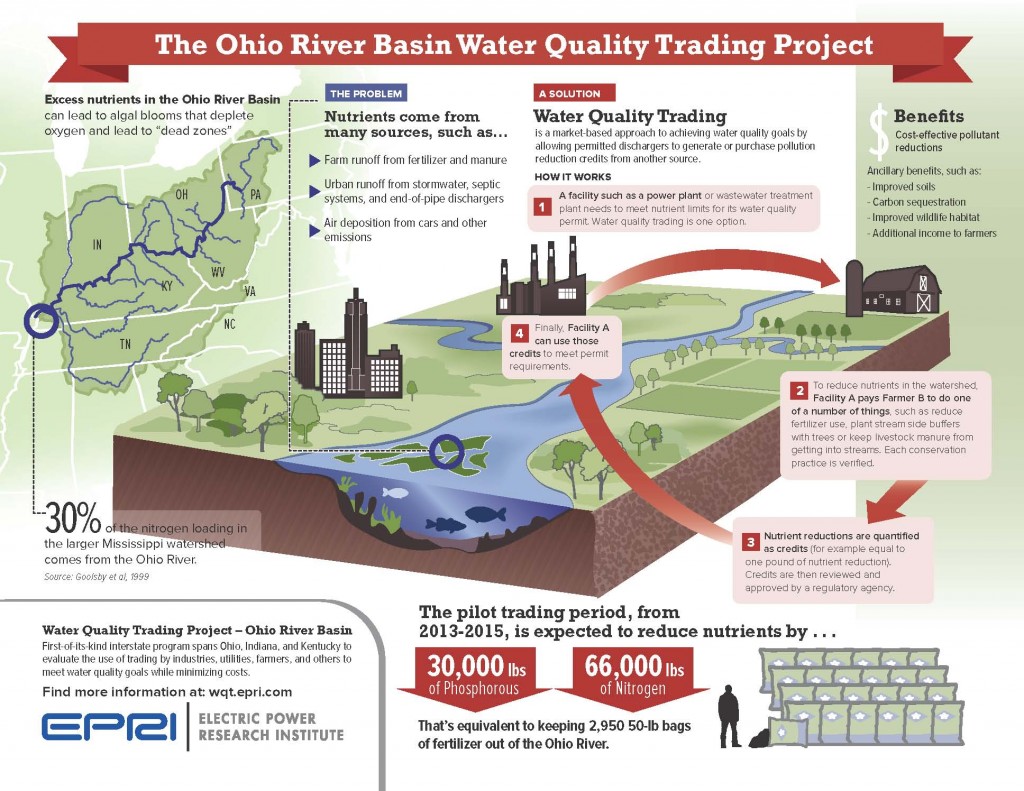 On March 11, the Electric Power Research Institute (EPRI) transacted the first interstate credits for  nutrients in the United States, officially launching water quality pilot trades in the Ohio River Basin. Duke Energy, Hoosier Energy, and American Electric Power are the first buyers in the program. Collectively, the companies purchased 9000 stewardship credits, agreeing to retire the associated nutrient and ecosystem benefits, rather than apply them towards possible future permit requirements. Stewardship credit trades will continue through 2014 and 2015 to test critical programmatic features, such as an online credit registry and live trading auction.

The program’s buyers can use the credits to meet corporate sustainability goals and also may be considered for future flexible permit compliance schedules by participating states.

Because the affected watersheds cross state lines, working on an interstate basis is essential. In August 2012, Indiana, Kentucky, and Ohio signed a first-of-its-kind interstate trading plan where the states can operate under the same rules, so water quality credits generated in one state can be applied in another. This framework set the stage for the March 11 pilot trades. At full-scale, the project could include up to eight states in the Ohio River Basin and potentially create credit markets for 46 power plants, thousands of wastewater facilities and other operations, and approximately 230,000 farmers.

On March 25, Peter Tennant, Executive Director of the Ohio River Valley Water Sanitation Commission spoke on behalf of the Ohio River Basin Trading Project at a hearing of the House Subcommittee on Water Resources and Environment. Other programs, including the Hampton Roads Sanitation District’s point-to-point trading effort, also were represented. The subcommittee received testimony covering water quality trading as an innovative tool to improve the nation’s waterbodies. Farmers, program directors, and water quality trading experts discussed the benefits and challenges in trading programs. Subcommittee Chairman, Ohio Representative Bob Gibbs (R–Canton), expressed his support for water quality trading as a potentially useful way to reduce nitrogen and phosphorous in watersheds by creating partnerships between point sources, such as energy generation and wastewater facilities, and nonpoint sources, such as farm fields.

Questions and challenges arose during the hearing, including drivers for program creation and reliable means for verification. It was recognized that there is not a one-size-fits-all approach to creating water quality trading programs across the nation.

Also in March, Washington Gov. Jay Inslee signed a SHB 2454 into law, launching an inquiry to determine whether a water quality trading scheme is feasible for the state. The effort will look at the number of potential buyers and sellers and what form the marketplace would take.

Watch a video of the hearing here.