On April 22, the U.S. Environmental Protection Agency (EPA) announced the winners of the agency’s first-ever Campus RainWorks Challenge — an innovative green infrastructure design competition for students. More than 200 student teams participated, representing 42 states. Entries were reviewed by more than 30 expert judges from EPA, the American Society of Landscape Architects, the Water Environment Federation, and the American Society of Civil Engineers. Winners involved with this event will be recognized at WEFTEC 2013®. The four winning teams and their entries are described below. 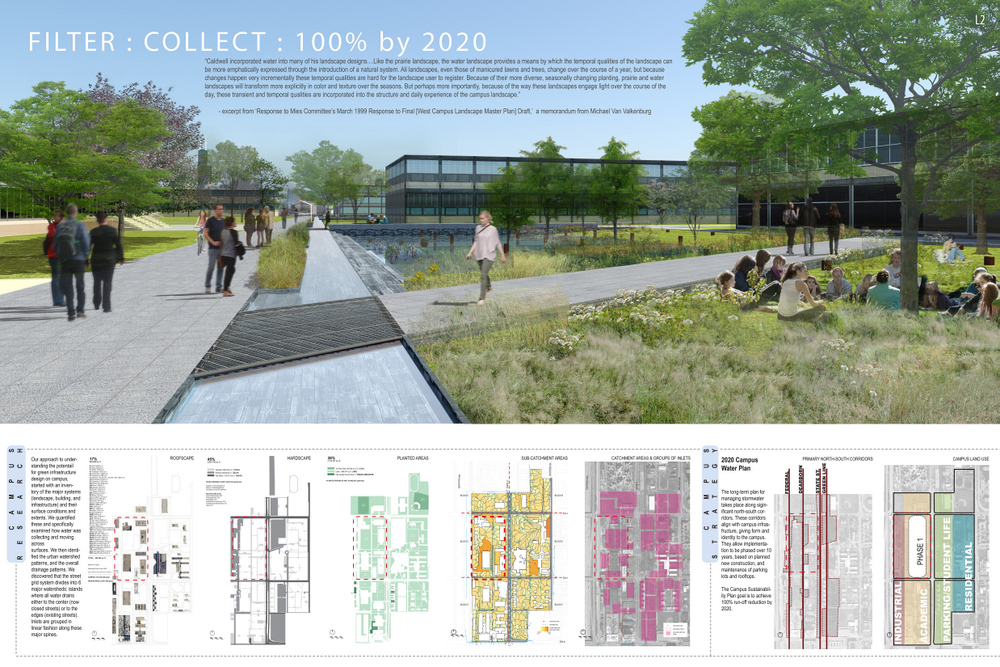 Illinois Institute of Technology First place, small institution
The Illinois Institute of Technology’s proposal focused on reducing campus impact on Chicago’s combined sewer system and decreasing the institute’s reliance on potable water from Lake Michigan. The proposal involves the transformation of a 365-m-long (1200-ft-long) section of Dearborn Street, currently a service lane for emergency and event vehicles, into a pedestrian thoroughfare connecting green infrastructure elements. These elements would include three water gardens, permeable pavement, and retrofits to academic buildings to direct stormwater into a treatment area. Underground cisterns would capture stormwater for landscaping, reducing potable use by 11,355 m3 (3 million gal) annually. Together, the green infrastructure elements would reduce stormwater from the site by 70% to 80%. Students also planned for ongoing research and an educational component. 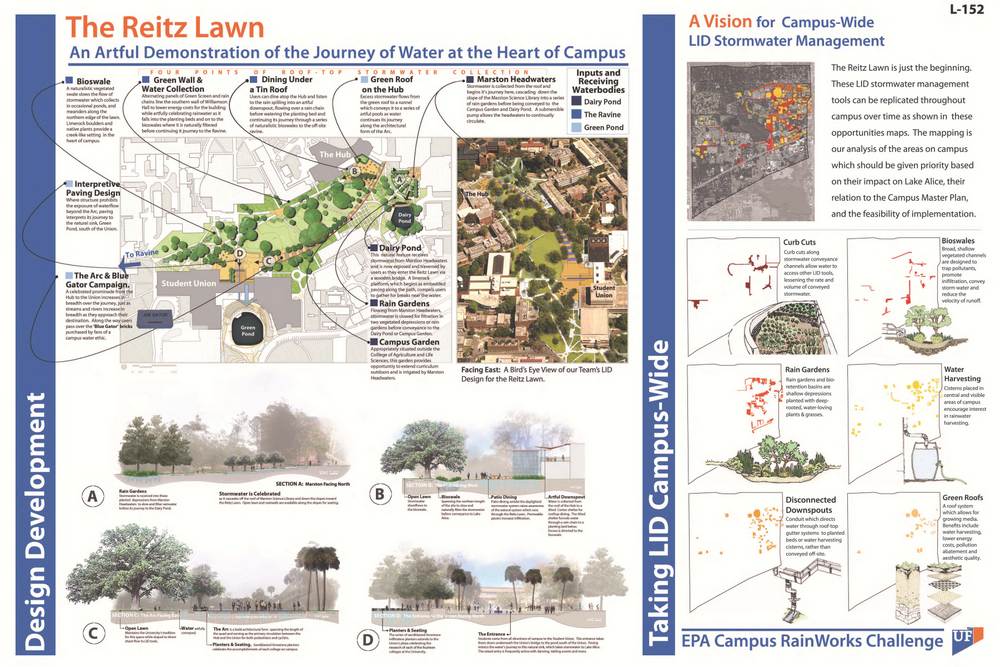 University of Florida First place, large institution
The University of Florida’s entry is a redesign of Reitz Lawn, a 4.5-ha (11-ac) open area and pedestrian corridor. The goal was to create a functional, attractive space that both raises awareness on campus and improves the quality of stormwater that reaches Lake Alice and drains into the Floridan Aquifer. The students’ design incorporates stormwater ponds, rain gardens, a green wall, a green roof, a campus garden, and bioswales. According to the students’ models, the bioswales can manage a 100-year storm without flooding. Unique among the entries, the University of Florida team surveyed fellow students about their proposed design. 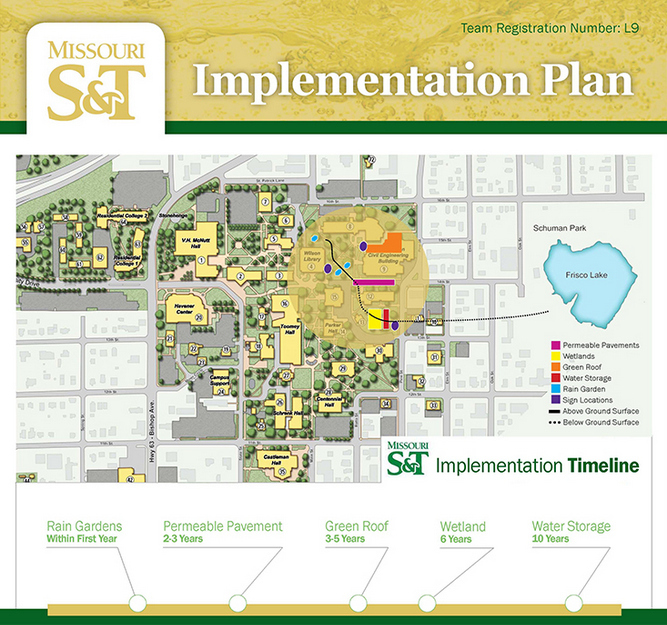 Missouri University of Science and Technology Second place, small institution
The Missouri University of Science and Technology’s proposal seeks to reduce nutrient and sediment pollution in Frisco Lake using technologies that are cost-effective in terms of both installation and operation and maintenance. After calculating anticipated runoff reduction, pollutant removal, and cost, students selected a green roof, rain garden, and permeable pavement. To reduce costs further, the group coordinated the proposed projects with planned university improvements by seeking input from campus planners. 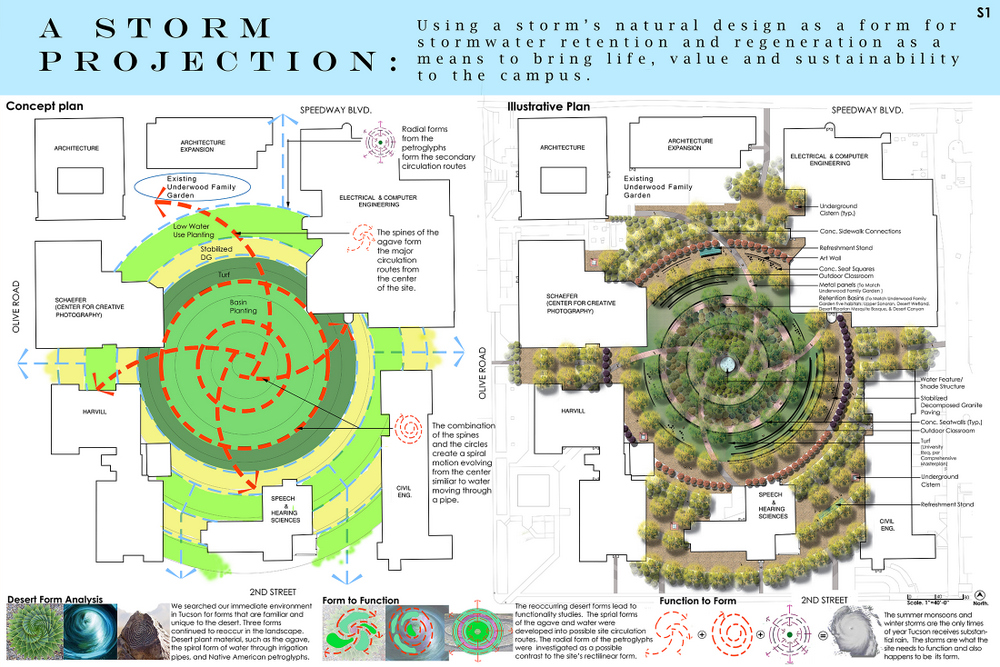 University of Arizona Second place, large institution
The University of Arizona’s proposal involves two rings of infiltration basins and five underground cisterns that store infiltrated runoff and condensate from heating, ventilation, and air-conditioning units on nearby buildings. These features will green the campus and reduce potable water use from 2650 m3/yr to 340 m3/yr (700,000 gal/yr to 90,000 gal/yr) while managing infrequent but intense desert storms. The project would replace a 6500-m2 (70,000-ft2) parking lot with a campus common area. It would also serve as a student outreach piece. The cisterns would be fitted with windows to show the water level, and, when full, the water would bubble out of the cisterns into a water feature beneath a central shade structure.

Teams from Kansas State University, Columbia University, California State Polytechnic Institute at Pomona, and the University of Texas–Arlington were recognized by honorable mentions for their entries.

Read more about the judging experience in a blog from Neil Weinstein, Director of the Low Impact Development Center, Inc. EPA plans to offer the Campus RainWorks Challenge again in 2013. Look out for more information in the coming months.