Subsurface gravel wetlands approximate the look and function of natural wetlands, with a high performance for removing sediments, nutrients, and other pollutants commonly found in runoff.

Gravel wetlands combine sedimentation on the surface of the system and microbial nitrogen removal in an anaerobic subsurface zone with physical filtration. The result is highly effective advanced stormwater treatment. 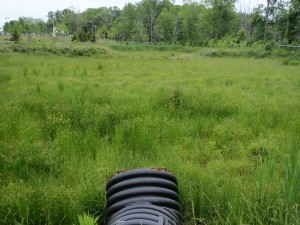 Based on 6 years of performance data collected by the University of New Hampshire Stormwater Center (UNHSC), average nitrate removal in gravel wetland systems is greater than 75% annually and 85% in the summer. The wetlands remove more than 95% of total suspended solids and have a phosphorus removal efficiency of 58%. In addition, seasonal performance evaluations show these systems to have a high level of functionality during winter months.

Originally developed for use in wastewater treatment, the Center for Watershed Protection introduced gravel wetlands for stormwater management in 1996. Initially, their implementation was minimal. However, usage is growing because of their documented exceptionally high level of treatment, especially for nutrients.

While similar in appearance, gravel wetlands should not be confused with constructed surface flow treatment wetlands, which are modifications of traditional ponds. The difference is the subsurface system that allows water to drain from the gravel wetlands, enabling them to function much like a dry pond. While the surface is dry between storms, the subsurface storage reservoir, filled with gravel, remains saturated and becomes anaerobic. 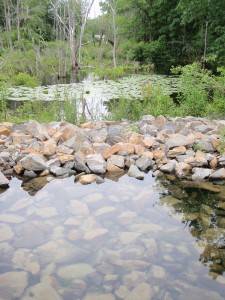 On the surface, wetlands are densely vegetated. Below the surface, gravel wetlands are composed of a series of flow-through cells consisting of wetland soil underlain by a thicker layer of angular stone or gravel. Stormwater typically enters the system through some form of pretreatment, such as a sediment forebay. Stormwater is then filtered and treated as it flows horizontally through the subsurface from cell to cell via gravity.

Studies at UNHSC show that, on average, gravel wetlands are able to reduce nitrate concentrations in treated effluent to less than 0.05 mg/L (0.05 ppm), phosphorus concentrations to 0.02 mg/L (0.02 ppm), and total suspended solids to 4 mg/L (4 ppm). While nitrate removal was highest in summer, gravel wetlands still performed well in winter, with a 33% removal rate. Studies also showed that maintenance of vegetation and removal of biomass every 3 years is important for maintaining high removal efficiencies.