On Oct. 30, the U.S. Government Accountability Office (GAO) publicly released a new report analyzing the use of green infrastructure by municipalities to meet the U.S. Environmental Protection Agency’s stormwater requirements. The report, EPA Pilot Project to Increase Use of Green Infrastructure Could Benefit from Documenting Collaborative Agreements, was prepared in September 2017, but not publicly released until October. The report investigated the level of green infrastructure (GI) adoption by municipalities, along with funding mechanisms, and the challenges integrating GI into stormwater management efforts. The report also focused on the role of EPA in promoting the use of GI at the local level. 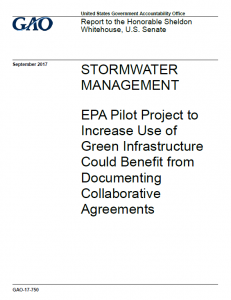 The report is based upon a random survey of 31 municipalities who are addressing regulatory requirements related to municipal separate storm sewer systems (MS4s) and/or combined sewer overflows (CSOs).

More than half of respondents reported that GI investments have been made in 5% or less of regulated areas in their community. Most municipalities stated that GI funding sources were fees or general funding sources. A majority of respondents stated that GI is more challenging to implement than traditional “gray” infrastructure. Despite this fact, most of the surveyed communities reported that implementation of GI was made in their community due to enhanced performance and potential co-benefits, and utilized these initial investments as a means to become more familiar with GI practices.

Lastly, the GAO report assessed EPA engagement and collaboration with communities, with a focus on the ongoing initiative led by EPA to support voluntary long-term stormwater planning

. The document recommends that EPA document this community engagement to more effectively collaborate with municipalities in the future.