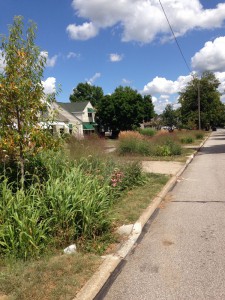 In a new study, Kent State University and Cleveland Metroparks researchers have collected some of the first data testing the effectiveness of green infrastructure projects at the watershed scale.

“[Green infrastructure] strategies are used throughout the country and in other countries, but the novel thing is that we were able to demonstrate that they work at a larger scale,” said study author Anne Jefferson, assistant professor of Geology at Kent State. “It is important for convincing people that it’s worth investing in these technologies.”

“One of the things that we show in the paper is that if you just installed rain barrels and rain gardens and collected only roof runoff, you couldn’t get anywhere near those reductions,” Jefferson said. “The bioretention cells that collected runoff from the street were important in collecting more stormwater runoff, even from parts of the neighborhood that weren’t participating in the project.”

Jefferson, Grieser, and Kimberly Jarden, a graduate student in Kent State’s Department of Geology, reported their findings in the journal Hydrological Processes in a paper titled “Assessing the Effects of Catchment-Scale Urban Green Infrastructure Retrofits on Hydrograph Characteristics.”

Cleveland Metropark’s work on urban water restoration builds on efforts at the Watershed Stewardship Center at West Creek, a partnership between Metroparks, the Northeast Ohio Regional Sewer District, and the West Creek Conservancy. The partnership’s goal is to promote urban watershed management throughout Northeast Ohio. Jefferson hopes that this project can exemplify effective ways to beautify neighborhoods and control stormwater runoff for other communities.

Under its Regional Stormwater Management Program, the Northeast Ohio Regional Sewer District will charge a stormwater fee based on impervious surface. However, residents and businesses can reduce their stormwater fee by installing practices like those studied.

The researchers also are interested in examining the effects of green infrastructure at an even larger scale as stormwater projects are built in area watersheds. There are plans to build a computer model of the West Creek watershed to simulate different stormwater management strategies along with the influences of climate change.

“We know that climate change projections for this region include more intense rain events, which can lead to more flooding and more stormwater runoff problems,” Jefferson said. “We want to see what stormwater management strategies will increase our resilience to projected climate change.”