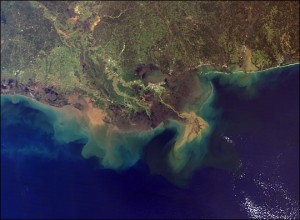 This image shows sediment from the Mississippi River entering the Gulf of Mexico two days after a rainstorm. Image by NASA’s Moderate Resolution Imaging Spectroradiometer (MODIS) aboard the agency’s Terra satellite in 2001.

On April 7, the U.S. Court of Appeals for the Fifth Circuit ruled that the U.S. Environmental Protection Agency (EPA) does not need to determine whether states in the Mississippi-Atchafalaya River Basin need new or revised water quality standards for nitrogen and phosphorus. The Mississippi River carries nutrient pollution to the Gulf of Mexico, where a hypoxic zone spanning 5,792 mi2 (15,000 km 2) has remained mostly unchanged in size since 1994.

In 2012, a coalition of environmental groups including the Gulf Restoration Network, the Natural Resources Defense Council, and the Sierra Club sued EPA for denying a 2008 petition to revise or set numeric nutrient criteria without determining if such standards were necessary. In its denial letter, EPA said that it would exercise its discretion and put its limited resources toward helping states address nutrient pollution. Limited resources, however, are a nonstatutory reason and not grounded in the Clean Water Act.

U.S. District Court for the Eastern District of Louisiana ruled in favor of the environmental groups and required EPA to determine whether federal water quality standards for nutrients were necessary.

According to the appellate court, however, in addition to agreeing or disagreeing on whether federal water quality standards are necessary, EPA can decline to make a necessary determination. However, the agency must provide an adequate explanation that is grounded in the Clean Water Act. For this reason, the appellate court remanded the decision back to the district court to determine whether EPA’s reason for declining to make a determination was legally sufficient.