This is the first comprehensive summary of scientific knowledge about the design and construction of coastal green infrastructure strategies. These strategies create, restore, or emulate the ability of natural coastal features to reduce erosion and mitigate storm surge, wave action, and still-water flooding associated with coastal flood events. The plan examines what natural strategies work best, so that projects being designed for New York Harbor can make use of the most effective natural infrastructure. 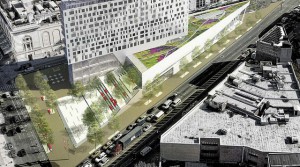 On Feb. 12, the New York City Department of Environmental Protection also announced six community-based stormwater management projects have been chosen to receive more than $3 million in funding through the Green Infrastructure Grant program. This program will be augmented by nearly $1 million in matching funds from the recipients. Projects will reduce pollution in the East River, Gowanus Canal, and Jamaica Bay by preventing some 23,000 m3 (6 million gal) of stormwater from entering the combined sewer system each year.

The grant program will help meet the goals of the New York City Green Infrastructure Plan, which aims to capture the first inch of rain that falls on 10% of the city’s impervious surfaces in combined sewer areas. The plan involves a combination of city-built projects in streets and sidewalks, regulations for new development and redevelopment, and retrofits of existing development, including those retrofits through the grant program.  A new round of grant funding will be available in 2015 for private property owners throughout the city, including commercial buildings, private schools and hospitals, and community and faith-based organizations.  Read more.