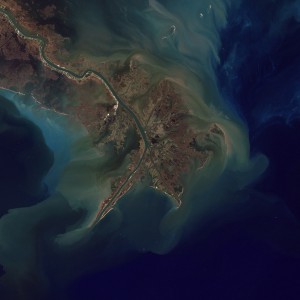 NASA image of the mouth of the Mississippi River by Robert Simmon, based on Landsat data provided by the UMD Global Land Cover Facility

On Feb. 12, the federal-state Hypoxia Task Force announced that it would fail to meet a 2015 goal to reduce the Gulf of Mexico dead zone from about 15,000 km2 to 5,000 km2. The task force has decided to extend the target date for shrinking the dead zone to 2035.

Created in 1997, the Hypoxia Task Force includes five federal agencies, 12 states, and Native American tribes in the Mississippi/Atchafalaya River basin. The task force set its original goal in 2001, but the 5-year average size of the dead zone has remained largely unchanged since 1994, according to a 2014 report by the U.S. Environmental Protection Agency (EPA) Inspector General.

High nutrient levels are one of America’s costliest, most widespread, and most challenging environmental problems. They are a key contributor each summer to the large area of low oxygen in the Gulf of Mexico known as a dead zone. Each of the 12 states in the Mississippi/Atchafalaya River Basin have outlined specific actions they will take to reduce nitrogen and phosphorus from wastewater facilities, industries, agriculture, and stormwater runoff.

Progress has been made in certain watersheds within the region, but science shows a 45% reduction of nitrogen and phosphorus loading to the Gulf of Mexico is needed. To track progress and spur action, the task force also is aiming for a 20% reduction in nutrient loads by 2025. To reach this goal, states and federal agencies will need to predict and measure how much certain actions reduce nutrient levels. During the May 2015 meeting, task force members will describe how tracking mechanisms, watershed monitoring, and computer modeling will be used to quantify progress, particularly by the state nutrient reduction strategies. Federal agencies will also work to quantify nutrient load reductions from such programs as the U.S. Department of Agriculture’s Conservation Partnership Program and the Mississippi River Basin Healthy Watershed Initiative.

In late February, EPA blogged that researchers have built the Coastal General Ecosystem Model (CGEM) to address the issue of nutrient pollution in the gulf. The model should help scientists and stakeholders better understand nutrient pollution dynamics. The model uses nitrogen and phosphorus data from the Mississippi river to predict how those inputs trigger eutrophication and hypoxia.

Researchers with the Iowa Geological Survey, housed at the University of Iowa, have created a guide to help farmers in the Ohio and Upper Mississippi river basins reduce nutrient losses. Based on soil type, land slope, crops grown, and nutrients used, farmers can use the guide to select a best management practice that optimizes runoff mitigation. Read more.