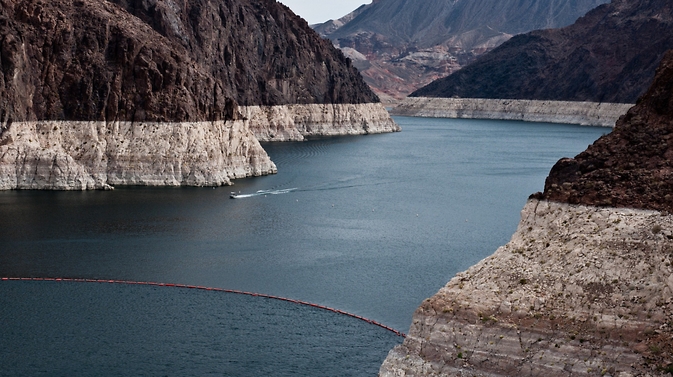 The Colorado River Basin lost nearly 65 km3 (53 million ac-ft) of freshwater over the past nine years, according to a new study based on data from NASA’s GRACE mission. This is almost double the volume of the nation’s largest reservoir, Nevada’s Lake Mead (pictured). Image Credit: U.S. Bureau of Reclamation

Scientists found that more than 75% of water loss in the drought-stricken Colorado River Basin since late 2004 came from underground resources. A study by the National Aeronautics and Space Administration (NASA) and University of California, Irvine revealed that the extent of groundwater loss may pose a greater threat to the water supply of the western United States than previously thought.

Water above ground in the basin’s rivers and lakes is managed by the U.S. Bureau of Reclamation, and its losses are documented. Pumping from underground aquifers is regulated by individual states and is often not well documented.

This study is the first to quantify the amount that groundwater contributes to the water needs of western states. According to Reclamation, the basin has been suffering from prolonged, severe drought since 2000 and has experienced the driest 14-year period in the last hundred years.

The research team used data from NASA’s Gravity Recovery and Climate Experiment (GRACE) satellite mission to track changes in the mass of the Colorado River Basin, which are related to changes in water amount on and below the surface. Monthly measurements of the change in water mass from December 2004 to November 2013 revealed the basin lost nearly 65 km3 (53 million ac-ft) of freshwater, almost double the volume of the nation’s largest reservoir, Nevada’s Lake Mead. More than three-quarters of the total — about 50 km3 (41 million ac-ft) — was from groundwater.

This rapid depletion of groundwater will compound the problem of short supply by leading to further declines in streamflow in the Colorado River. “Combined with declining snowpack and population growth, this will likely threaten the long-term ability of the basin to meet its water allocation commitments to the seven basin states and to Mexico,” said researcher Jay Famiglietti who is a senior water scientist at NASA’s Jet Propulsion Laboratory. Read more.